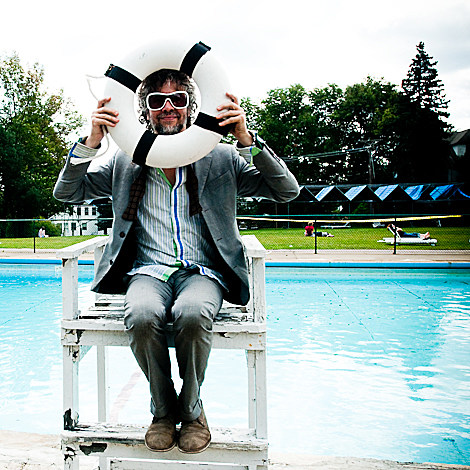 The Flaming Lips have revealed they're in talks with Des McAnuff to turn their hit 2002 album Yoshimi Battles The Pink Robots into a theatrical spectacular.

Frontman Wayne Coyne tells WENN, "We've talked about doing something with Yoshimi Battles The Pink Robots now for about five or six years. They did it with Tommy and Des McAnuff was the director, and he's the one that wants to do Yoshimi.

"We've actually pursued it to a certain extent and I think that where it sits is really just me deciding to dedicate a couple of years of my life to making it.

"It's a strange opportunity but I know we've talked about it since 2003. We would incorporate all the songs and probably write some other music that told a little bit more of a story. I guess my biggest dilemma is there's not really a story with Yoshimi Battles The Pink Robots; it's just a series of unconnected songs that sound connected when you listen.

"That being said, I don't think it would be overly impossible to draw some connections and come up with some type of emotional storyline." [WENN]

The Flaming Lips will be playing in NYC this July with a show at Central Park SummerStage. That's already sold out, but way before that they have that April 19th show at Wellmont Theatre in Monclair, NJ, (just six days from now) which despite being listed as sold out still has tickets available at the moment. Also in April they have a few other shows - outside the NYC-area, but not that far. Lots of road trip opportunities.

They play Mid Hudson Civic Center in Poughkeepsie (put on by Vassar College) on Saturday, April 17th - tickets are still on sale. Stardeath & White Dwarfs open both the Vassar show and Wellmont, and The Hood Internet play Vassar too. Between those, Flaming Lips perform in Ithaca (Cornell University's Barton Hall to be exact).

The same month as the Central Park show, Flaming Lips have other New York State/New Jersey gigs: July 4th at Atlantic City House of Blues (tickets), July 22nd at ArtPark in Lewiston, NY, near Buffalo (tickets), and July 23rd on an awesome bill with Black Keys and Morning Benders (together in NYC later in July) at CMAC Performing Arts Center in Canandaigua, NY, south of Rochester (tickets).

All Flaming Lips tour dates and more are below...