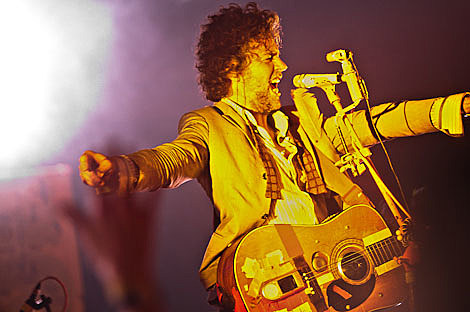 For the third year, the Lips created an outlandish visual and aural spectacle for their hometown holiday [New Year's Eve] show. The estimated crowd of 10,000 delighted in the Grammy-winning rockers' surrealistic sonic frolicking into the wee hours of New Year's Day.

"I do believe all the cool people in Oklahoma City are here tonight," Lips frontman Wayne Coyne said before the band's set started. "It's not really a show; it's a party. We're gonna play music and stuff, but you (expletive) have got to freak out. This is a freakout."

The audience was eager to the turn the show into a stupendous soiree: Attendees donned animal masks, feather boas and elaborate costumes, with outfits ranging from astronauts and superheroes to bananas and ballerinas. [News OK]

The Flaming Lips played Oklahama City's Cox Center on New Year's Eve, where they were joined by Stardeath & White Dwarfs for their rendition of Dark Side of the Moon. Video of the midnight ball/balloon drop at show and their version of "Breathe" are below.

Both bands will be playing NJ's Wellmont Theatre on Monday, April 19th. Tickets go on sale Friday, January 29th at noon. Videos and a couple other dates are below...