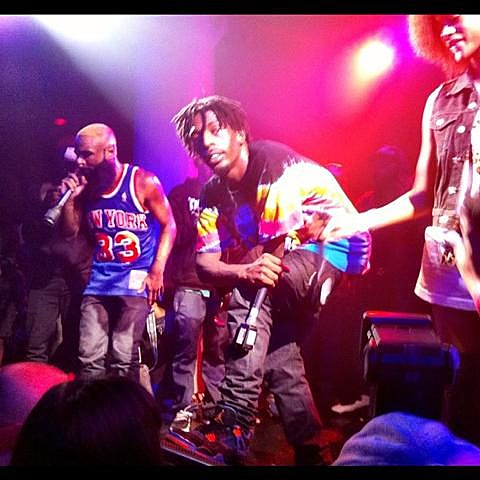 Flatbush Zombies packed Santos last night for the Noisey showcase with Children of the Night, The Underachievers, Bodega Bamz, and more. The show was a mad house and the line to get in was wrapped around the block. If you were there, how was it?

Since that show happened, the hip hop crew have been revealed as the special guest at tonight's MTV showcase at The Studio at Webster Hall (10/18) with Big K.R.IT., Mr. Muthafuckin' eXquire, Le1f, and Killer Mike. Doors are 5:30 for what is sure to be a great show and tickets are still available. You can also try to get in with your CMJ badge. Set times are below.

For Killer Mike, this is an early show that he tacked on before he heads to Irving Plaza where his tour with GZA (performing Liquid Swords), Sweet Valley (Nathan of Wavves' beat project), and Bear Hands hits tonight. Since we last posted about it, that show's lineup has been expanded to include Haleek Maul (who also played the Santos show with Flatbush Zombies last night) and The Color Film. Tickets for that show are still available, or you can try to get in with your CMJ badge, or try to win a pair from us. Contest details are below. The show starts at 7 PM.

The Studio show is the first of two shows for Big K.R.I.T. tonight, who also plays the Cinematic/Ecko/XXL showcase at SOB's later on with Joey Bada$$ & Pro Era, Smoke DZA, Fat Trel, and others.

Contest details for the Irving show and set times for the Studio show are below.

For a chance at winning tickets to GZA at Irving Plaza: either tweet something that includes both @BrooklynVegan AND "GZA" in the tweet, or send an email to BVCONTESTS@HOTMAIL.COM with the subject line "GZA". Include your first and last name in the email. We'll pick a winner at random and contact them with more details. If you enter by email, it will not be shared with anyone else. Good luck!