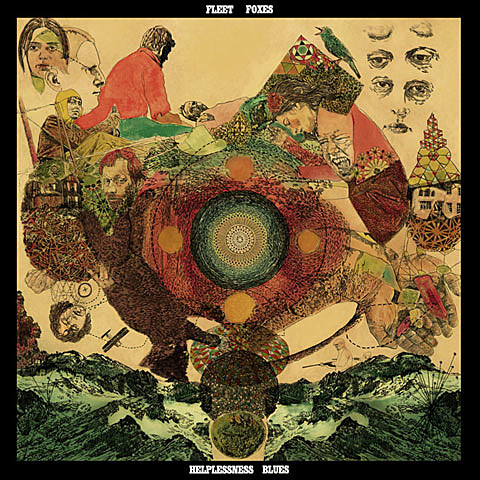 On May 3rd Fleet Foxes will release Helplessness Blues (Sub Pop/Bella Union), the much-anticipated follow up to their 2008 self-titled debut. The release of the twelve-track album will coincide with the band's first North American tour dates since August 2009 followed by a string of UK and European dates. The tour will begin in Vancouver on April 30th and end in London England. Fleet Foxes have made the title-track of the album available for download now.

Helplessness Blues was recorded over the course of a year at Avast Recording, Bear Creek Studios, Dreamland Studios, and Reciprocal Recording. The album was mixed by Phil Ek and co-produced by Fleet Foxes and Ek. The piece that appears on the album cover was illustrated by Seattle artist Toby Liebowitz and painted by Chris Alderson. Fleet Foxes is Robin Pecknold, Skyler Skjelset, Christian Wargo, Casey Wescott, Josh Tillman and Morgan Henderson.

Download that new track, right over the new album's cover art, above.

The presale for the new Fleet Foxes dates will happen at the band's website starting Tuesday the 1st at 9am PST. Those dates include a May 18th show at NYC's United Palace Theatre.

All dates and a just-released, studio-quality video of Oh Land covering "White Winter Hymnal" (like she just did at Hiro Ballroom), below...