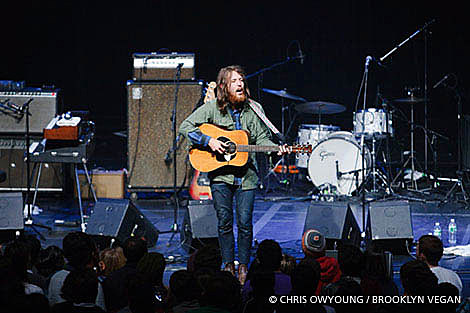 The above is a list of some of the musical guests Saturday Night Live has had on in the past 3-4 years. It's not super surprising then that next week's musical guest is going to be one of 2008's biggest indie success stories. The Sub Pop-signed Fleet Foxes will join host Rosario Dawson on the NBC TV show on January 17th.

This week (January 10)'s SNL guests are Neil Patrick Harris and Taylor Swift. Watch it with your pants off.

Taylor Swift is actually on an indie label, and if you count Arctic Monkeys (along with Arcade Fire, Spoon, the Shins, and Vampire Weekend), Fleet Foxes will actually be the 7th indie indie-label band ever to play the show (for what it's worth).

Who do you think they'll pick next? Bon Iver? Animal Collective?

Fred Armisen recently performed with Yo La Tengo, appeared in a Beardo sketch, played some shows with Aimee Mann, and helped raise money for NY Cares at the now-extinct Knitting Factory.

Video of Fleet Foxes performing "White Winter Hymnal" for one of La Blogoteque's Take Away Shows, below...