photo: Fleet Foxes in Austin in 2011 (more by Tim Griffin) 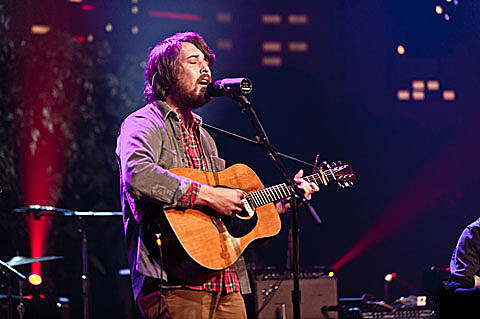 In the spring of 2014, Robin Pecknold posted an update saying he was working on new Fleet Foxes music. We still haven't heard any of that, but here's something else to look forward to. Robin announced that he'll be opening the European and West Coast legs of Joanna Newsom's 2016 tour, and debuting an all-new solo set on the tour. He writes on Facebook (via Stereogum):

Very excited / honored to say that I'll be opening some dates for Joanna Newsom early next year, playing an all-new solo set. I'll be on both the European and the West Coast legs of her tour, in late winter / early spring. Hope to see some of you guys out there! asdkljaslkfjalw;ekjwal;erjwerpiwuerpoiwueropialkj;kJ;lkwj;lkejrew

Well that's exciting! This follows Robin uploading a cover he recorded of The Five Keys' 1956 song "Out Of Sight, Out Of Mind" a couple weeks ago. He recorded it with past collaborator Neal Morgan (who's also worked extensively with Joanna Newsom) on drums, and he basically makes it sound like a Fleet Foxes song or something off his solo EP, with a chaotic noise section thrown in. It's a great cover that really brings something new to the song. Listen below.

Meanwhile, Joanna Newsom (who Robin's toured and collaborated with before and covered) is on another leg of her tour right now, with Alela Diane & Ryan Francesconi opening. We just caught her excellent show at Brooklyn's Kings Theatre (review, setlist), and she plays NYC again on Friday (12/11) at The Apollo (sold out). Updated dates are listed below.