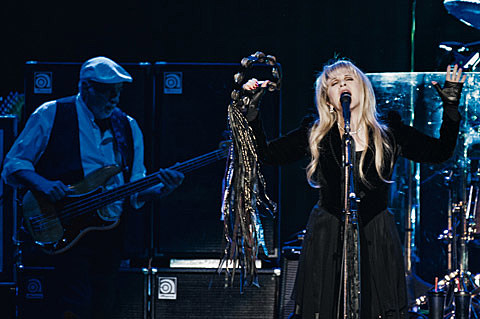 Fleetwood Mac's classic lineup of Christine McVie, John McVie, Mick Fleetwood, Stevie Nicks and Lindsey Buckingham are currently on a tour which lands in NYC tonight to begin a three-show run in the area. The only show in NYC proper is MSG tonight (1/22), and that's followed by Atlantic City's Boardwalk Hall on Saturday (1/24) and Nassau Coliseum on Sunday (1/25). They return again next month to hit Prudential Center on February 8. You can still get tickets to those.

The tour's recent stop in Lincoln, NE last week was cut short after drummer Mick Fleetwood got sick backstage. Independent.IE reported, "A drum technician played Go Your Own Way for Fleetwood, then Christine McVie played the piano and sang Songbird with guitarist Lindsey Buckingham before the band ended the show." Luckily everything went fine at the following show in Grand Rapids. Let's hope it stays that way in NYC!

In related news, Night of 1000 Stevies, the annual Stevie Nicks tribute drag/burlesque/dance party returns for its 25th year to NYC's Irving Plaza on May 1. Tickets are on sale.

A video and the setlist from the Grand Rapids show below...