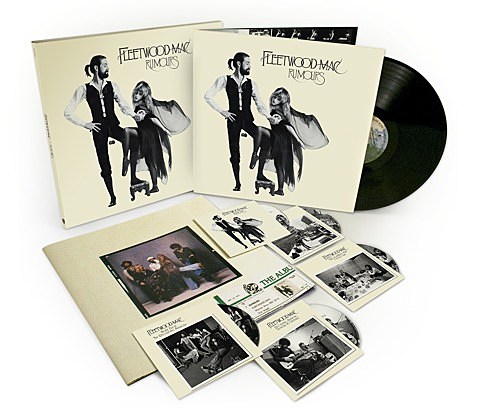 As mentioned, Fleetwood Mac are going on a tour in 2013 which hits the NYC area on April 8 at MSG, April 20 at Mohegan Sun in CT, and Prudential Center on April 24 in NJ. Tickets for those shows went on AmEx presale earlier this week and Live Nation presales begin today (12/14) at 10 AM (password: "FMAC"). General on-sale starts Monday (12/17) at 10 AM.

In related news, in honor of the tour Fleetwood Mac will release a 35th anniversary reissue of their classic album, Rumours. The reissue is due out on January 29 via Rhino. The reissued vinyl album will include the Rumours-era b-side, "Silver Springs" There's also an expanded edition which includes a disc of live recordings from the Rumours tour and a disc of early takes and demos from the recording sessions. Plus, there will also be a deluxe edition with everything in the expanded edition, in addition to another disc of outtakes and a DVD documentary about the album called The Rosebud Film.

When we were there [in the UK] in 2011, I watched it. I watched Beyonce and it was pretty amazing! I had just got home from the Hyde Park thing, so I was just home from my own show and I turned on the TV and we had a pretty big screen in the hotel where we were, so I sat and watched like three hours, four hours of it, so would I love to do it? I'd Love to do it!

The full reissue tracklist and some classic Rumours videos are below.

Fleetwood Mac - "Go Your Own Way"