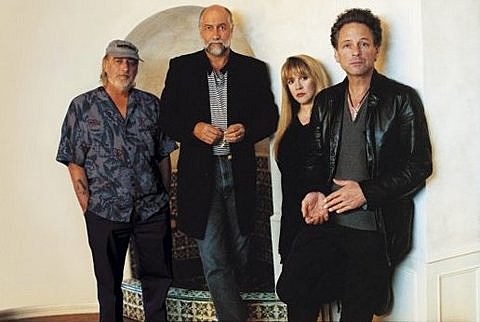 Stevie Nicks came to "CBS This Morning" yesterday (7/11) for an on-air interview, during which she revealed that Fleetwood Mac plan to reunite "next year, so far." "It's the plan. Because that's what we do. I do my thing. And Lindsey (Buckingham is) out doing his thing now." During that interview, Stevie also spoke about the recent suicide of Fleetwood Mac member Bob Welch, saying "I can't even tell you what in the world would have pushed him to do something that crazy."

Stevie Nicks and Lindsey Buckingham are both currently on their own solo tours. Stevie hit the NYC area a few times in the past month, including Beacon Theater and she plays tonight (7/12) at Mohegan Sun in CT. Lindsey's tour is ongoing as well, and it hit NYC back in June for a show at BB King's.

As mentioned, there's also a Fleetwood Mac tribute in the works which comes on August 14 and features covers by mostly indie rock artists. Since we last wrote, many of those covers have surfaced on the internet. 10 of the 17 total covers are streaming below, including Lee Ranaldo Band and J Mascis' "Albatross," Antony's "Landslide," Billy Gibbons & Co.'s "Oh Well," Best Coast's "Rhiannon," The New Pornographers' "Think About Me," Lykke Li's "Silver Springs," Karen Elson (produced by Beck)'s "Gold Dust Woman," Matt Sweeney and Bonnie 'Prince' Billy's "Storms," MGMT's "Future Games," and The Kills' "Dreams."

Those streams and lists of all Stevie Nicks and Lindsey Buckingham dates are below...