We hosted a Flight of the Conchords (FOTC) contest. Some winners won passes to a screening of the first episode of the new HBO series. Now EVERYONE - even those who don't have HBO (like me) - can watch the first episode thanks to the kind folks at HBO.com. Look for appearances by UCB, Rififi and Union Hall regulars Arj Barker, Eugene Mirman, and Kristen Schaal.

Speaking of Kristen Schaal who was also a guest on the 24 Hour Human Giant Marathon on MTV, we asked all those entering the FOTC contest to tell us who their favorite stand up comedian was. We got something like 50 comedian names total, but these were - by a small margin - the top seven:

Brian also appears in Human Giant, the Sarah Silverman Program, Tim & Eric Awesome Show, Reno 911, Flight of the Conchords, is one of Patton Oswalt's Comedians of Comedy, and used to write for the David Cross' Mr. Show (and stuff). It's one big alterna-comedy web.

And speaking of Brian Posehn in a Mastodon shirt, Mastodon also played the Human Giant marathon (yeah, so did the National -blah, blah - JUST KIDDING)......

Mastodon on MTV at noon 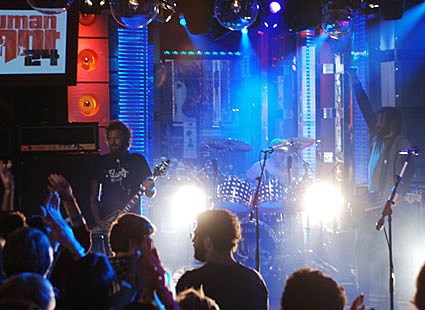 How were Mastodon and Cursive at Roseland Ballroom?

And speaking of speaking of Human Giant and their 24 Hour Marathon that Mastodon played - in case you weren't watching during the last hour when they officially announced it - Human Giant (Aziz, Paul Scheer & Rob Huebel) WILL be back for a second season on MTV. Congrats to them.

Michael Showalter, one of their many other guests, also confirmed the upcoming release of all four seasons of MTV's the State on DVD - with extras and all that. I'm very excited. Michael Showalter's appearance was also one of the tensest moments in television. I loved it. If you don't know what I mean, read this related interview at Radar.

So you read this far, but did you watch the first episode of Flight of the Conchords yet? What did you think? I'm not about to order HBO, but I like it. A little bit like Tenacious D which... I don't know. I just needed to work that in.

See Flight of the Conchords live on tour.