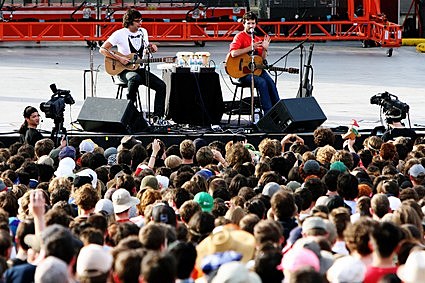 U.S. cult hit television show "Flight of the Conchords" follows the travails of a marginally talented musical duo from New Zealand trying to make it in New York City, but in reality the pair are far from struggling.

Jemaine Clement and Bret McKenzie already have one Grammy, have been nominated for another and the second series of their Emmy-nominated show returned to HBO cable network this month after an absence of more than a year.

James Bobin, co-creator and executive producer, said the second series was delayed by the 14-week writers strike, which ended in February last year, and "the boat to New Zealand," chimed in McKenzie at the show's red carpet launch this week.

McKenzie, 32, and Clement, 35, university friends who formed "Flight of the Conchords" a decade ago to improve their guitar skills, said they set out to make a "funny and musical" TV show and that creating the second series was a little easier.

"When we first started we didn't know what we were doing," said Clement. "We watched lots of sitcoms on video because we had never written one, none of us had written one before." [Reuters]

Season two of the TV show is airing on HBO now (Sundays at 10PM to be exact).

Tickets go on Ticketmaster presale Monday February 2nd at 10AM for a new North American FOTC tour that includes an April 14th show at the elegant Radio City Music Hall in NYC.

All currently known FOTC dates below...