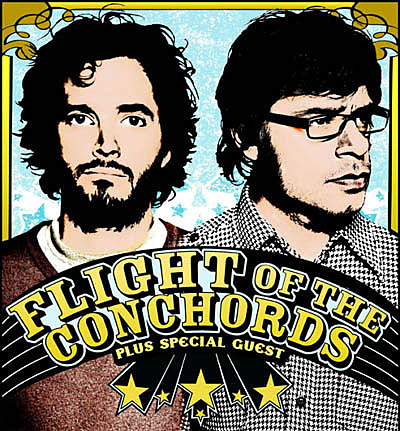 The Onion AV Club: The first season [of Flight of the Conchords] is almost an encyclopedia of the New York alternative-comedy scene, with Kristen Schaal and Eugene Mirman in recurring roles, and guest appearances by Todd Barry and Demetri Martin. Was there a thought that that might be a good way to get the show to an American audience?

Jemaine Clement: It can go a long time with just New Zealanders, but we try to make sure there's American characters in it. I'm always aware when we're looking through the script that in the first few scenes, there should be an American character.

BM: We didn't cast them to try and break into a market or anything. We cast them mainly 'cause we knew them. And we didn't want to have people that were well-known.

JC: It really is like, "Who do we know?" Todd, Demetri, Arj [Barker], and Eugene are all the Americans we knew.

Tickets go on presale (password = sugalumps) at 10 AM for the 2009 Flight of the Conchords tour including April 14th at Radio City Music Hall in NYC. Kristen Schaal is opening that show. Other tour openers are Eugene Mirman and Arj Barker. One show is with Iron & Wine.

All (updated) tour dates below...