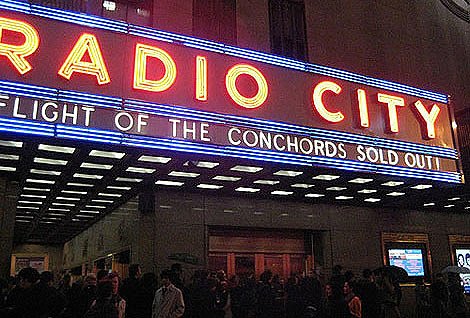 An expressive crowd -- every one of the venue's 6,200 seats was filled, as they will be for an encore performance tonight -- responded to the nerdy New Zealanders with raucous catcalls and applause that rarely let up during the hourlong set. [Bloomberg]

FOTC show star and tourmate Eugene Mirman hosts tonight's sold out Nada Surf show at the Bell House. Want to go? The venue will be selling 40 tickets at the door.

Mirman will also be appearing at John Wesley Harding's Cabinet of Wonder show at (Le) Poisson Rouge later in the evening.

Holly Miranda is also on the bill for the Bell House tonight. If you miss her, she has another NYC show scheduled for Tuesday, May 5th at the Mercury Lounge, with Illinois. Tickets are on sale now.

Like Flight of the Conchords, Neko Case did a two-show NYC run -- the second of her two shows at Nokia was last night. Opening her first show (April 13th) on was Crooked Fingers, who played a second show at the Bell House last night. Tallest Man on Earth played their first of two shows last night - the second is at Bowery Ballroom tonight with Red Cortez - both bands will play Culture Shock at SUNY Purchase this weekend.

Last but not least (and not related), just wanted to throw in a mention of Canadian songster Hawksley Workman, who played Joe's Pub shows in December and January, is at the same venue tonight. Tickets are still on sale.

Did you do your taxes?