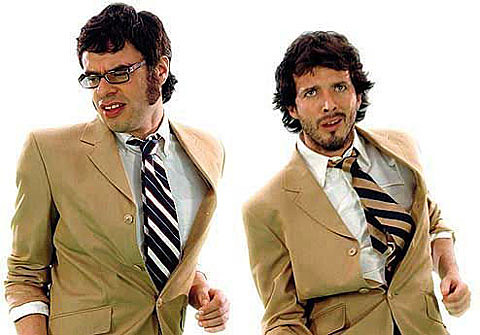 It's been six years since the last new Flight of the Conchords episode on HBO. Jemaine Clement and Bret McKenzie have played live shows since (like at the McKittrick Hotel two years ago) but there's now hope of new stuff. At a press junket for his new film People Places Things, Clement was asked if we might ever get some new Conchords material, like a movie, and he replied like this:

We have actually started writing one...but who knows if it will ever be made, we've written some notes for some different film ideas. We're not down to the stage where we're going, "The film is going to be like this," it could be this, this, this, this, this.

That's a lot of "this." In other very vague news, Clement has said that he and McKenzie were considering a North American tour soon as well, though nothing has been announced either.

In the meantime, you can see Clement in People Places Things (watch the trailer below), hear him as a talking horse in those DIRECTV commercials, and if you haven't seen the terrific vampire mockumentary What We Do in the Shadows (that he co-wrote and stars in), it's available on various streaming services and DVD. He's also working on a new HBO series with Judd Apatow which he describes as "The Twilight Zone, but comedy." He's also starring in Steven Spielberg's adaptation of Roald Dahl's The BFG that's being written by Melissa Mathison (who wrote E.T. and very little else since). Stay tuned.

McKenzie, you may remember, won an Oscar in 2012 for writing "Man or Muppet" from the 2011 The Muppets movie and wrote songs for 2014's Muppets Most Wanted as well.