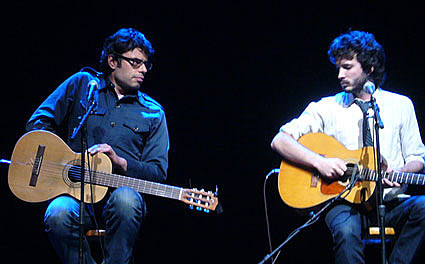 It has been a very very very long time since I last saw Flight of the Conchords perform live. I actually even sort of forgot about them for a while. But all of a sudden they've exploded back onto the scene with a vengeance and now seem to be everywhere. Of their two "sold out" * shows at Blender Theater at Gramercy I was able to catch second show on 6/14. I had high hopes because my pal Matt went the first night (6/13), and told me this:

The show was great. Really hilarious. Eugene Mirman came out around 8:40 and did a solid 45 minutes (or so), then instead of an intermission, he brought the Conchords right out and they performed till around 10:45. They did all the big songs (Business Time, Think about It, Jenny), and encored with ‘Bowie’s in Space’, which is probably the most brilliant Bowie homage ever.

The opener was their HBO series co-star Rhys Darby whose forté, really, is making funny sound effects a la Michael Winslow. I saw him a while back at the final Hot Tub Variety Show at Comix and found him a bit corny. However, this time around he was extremely funny and balanced his sound effects with actual stand up much better than before. He was phenominal and I got the sense the crowd was digging his schtick.

Then came the Conchords. First, I have to give props to the crowd. It seemed to me that each and every person in the room was a devoted Conchords fan. I never once got the impression that some of the people who were there were there because it was a 'hot show' or a 'scene'; an impression I get at a lot of shows in NYC, comedy or otherwise. It was one of those things where once the Conchords would strike the very first note of a song, 85% of the people there knew exactly what song it was and would go bonkers. It was fantastic.

The Conchords themselves were spectacular. Their songs are musically well constructed and are extremely funny without resorting to the use of any vulgarity or excessive lewdness. All the songs they played were so good, but the highlight for me was the song Bowie's in Space (if you want go here and scroll down to read the lyrics). Bret and Jemaine sing the tune using every vocal style David Bowie ever used. It is the perfect imitation, the perfect homage.

Because the Conchords are a comedic duo who play acoustic guitars and have their own show on HBO, some people are quick to refer to them as 'New Zealand's Tenacious D'. On paper they might appear similar, but last night's show proved that the Conchords are much gentler, sweeter, funnier, less anthemic, and way more sincere than the D.

Look for a Flight of the Conchords EP on Sub Pop Records in August 2007.

* "sold out" in quotes because, from where I was standing, I counted around 10 empty seats

Previously
* more Flight of the Conchords