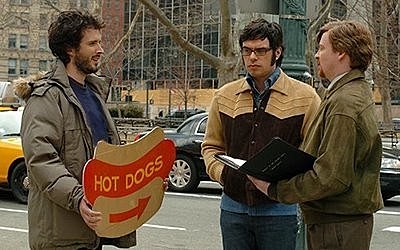 Night one (May 6, 2008) of Flight of the Conchords' two night stint at Town Hall was fantastic. Todd Barry opened the show and handily took control of the completely sold out room. A 20-year comedy veteran and favorite of mine, Todd made the season finale of Flight of the Conchords the best Conchords episode yet. The Conchords came out right after Todd and the place erupted. I mean, the place went completely apeshit. Like, Beatles-era apeshit. A girl in front of me even had a Hot Dog sign. They kicked the show off with "Inner City Pressure" and from there continued with a string of classics including "A Kiss is Not a Contract", "Bret You Got it Goin' On" that lasted over 90-minutes. They played two great new tunes too. Sadly, they didn't play "Bowie" which was a crushing let down. Personally I found their between song banter a tad on the meandering side, but I'm definitely in the minority there; the crowd devoured every thing these guys did for the entire show. The interludes served as perfect opportunities for people in the audience to scream song requests and other provocative oaths which the Conchords handled with unprecedented smoothness.

Tonight's show (May 7) is sold out as well, but last night there were a handful of tickets at the box office so it's probably worth stopping by and trying your luck. And for Christ's sake, DON'T buy a ticket from one of the scalpers. The people in line in front of me - a father with his teenage daughter - were turned away because their tickets were forgeries. Thighs has the complete set-list as well as another review.

Check out some classic videos below...