Floor at The Earl (more by Rich Gaccione) 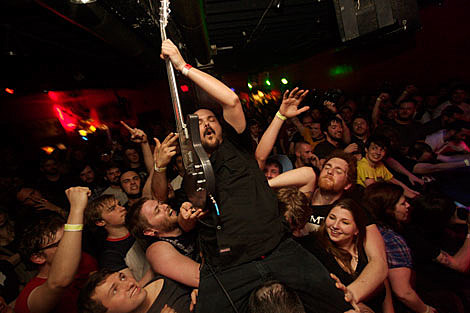 South Florida's FLOOR were around for roughly 10 years and recorded well over a dozen times during their on-and-off existence... and only in the wake of their demise did underground audio followers finally take note...

From the living rooms and basements of 1992 to the studios of 2001/2002, FLOOR had an incredible evolution from the GODFLESH and early-MELVINS-inspired sludge worship, to the unrivaled sugary doom/pop amalgamation which would eventually pave the way for TORCHE, HOUSE OF LIGHTNING and others. The changes in sound from recording-to-recording... against what would eventually follow, it becomes crystal clear that FLOOR were consistently operating on that fabled "next level". [Robotic Empire]

And now, that next level is RIGHT HERE IN NYC! Brooklyn Vegan & 1000Knives are pround to announce the return of Floor with Unearthly Trance on June 26th at Club Europa in Brooklyn as part of the Northside Festival! Tickets go on sale at NOON TODAY for this all-ages, early show (7pm doors), or get in with your Northside badge. It's gonna be a rager.

It's one of two shows the reunited Floor are going to play during their visit North. The first will take place one day earlier, 6/25 at First Unitarian Church in Philly with two great openers, Gods & Queens and Javelina.

And it's one of two shows that the great Unearthly Trance has in store for NYC, including June 3rd as part of the Tones of Death monthly shindig (which includes Gnaw, Bubonic Bear and Sin of Angels this week, May 6th). For more on that show, head to the Facebook invite.

Floor's Steve Brooks plays Rumsey Playield in NYC on May 26th with Torche as part of their tour with Coheed & Cambria and Circa Survive. Tickets are still available.

Floor at Eruopa is an earlier show, so you should be able to make it across town to catch at least part of BV's other show that same night at MHOW, with Memory Tapes, Twin Sister, DOM and ZAZA. Tickets are up, or try to use your Northside badges.

Floor are supporting their recent mega-boxset, out NOW on Robotic Empire.

Show flyer for Europa and some video from their show at The Earl on 4/3, below... 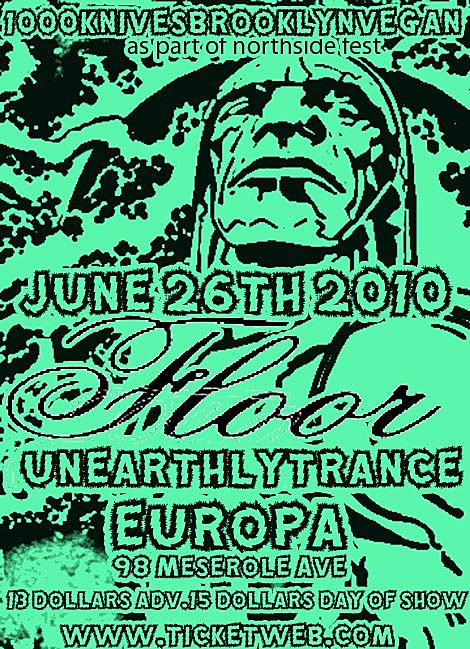