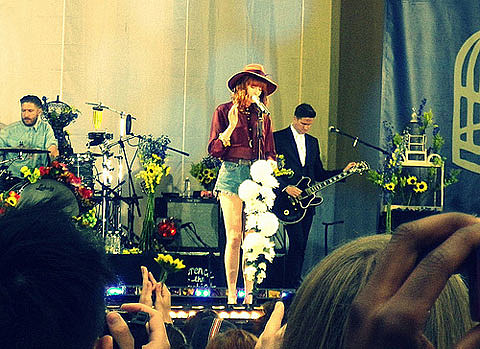 Since Good Morning America concerts now happen at Rumsey Playfield aka Central Park Summerstage (full schedule below), Florence & the Machine actually played the outdoor NYC venue twice on Friday (6/24). She played a short set early in the morning for Good Morning America and then a proper Summerstage show later that night with Twin Shadow and Bubbles. At the night show Florence opened the track "Blinding" by singing the intro to Lady Gaga's "Judas" (Lady Gaga notoriously played the first 2011 Good Morning America show on May 27th). Check out a video of that and some others from both Florence shows below.

Twin Shadow's next NYC show is at Webster Hall with Diamond Rings.

what is that over her shoulders??? 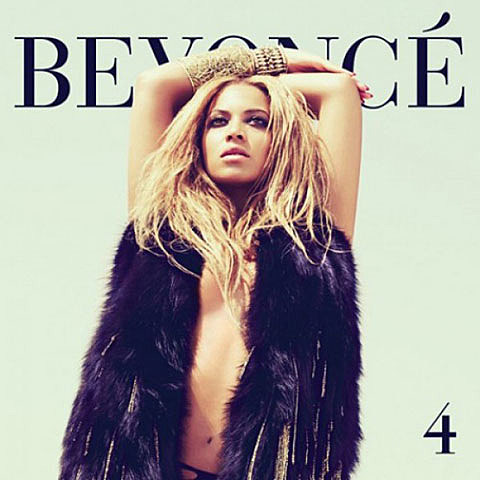 Beyonce, whose new album 4 was released today (6/28), who also just headlined Glastonbury (with help from Tricky), and who plays the NBC NYC fireworks show, plays Good Morning America at Rumsey Playfield on July 1.

Beyonce's new album seems to be what everyone has been talking about, especially since it leaked back on June 7th. Even Beyonce addressed the leak on June 8th:

My music was leaked and while this is not how I wanted to present my new songs, I appreciate the positive response from my fans. When I record music I always think about my fans singing every note and dancing to every beat. I make music to make people happy and I appreciate that everyone has been so anxious to hear my new songs.

Indie music critics are loving it, but not everyone is, like NME who said "she's still dangerously in love with boring ballads."

Apparently some of her LGBT fans are disappointed too (and are not dancing to every beat). According to Sandra Rose, after the album leaked, the actual release date was pushed back in part because of criticism from her gay fans. This has not been confirmed, but she wrote:

Beyoncé and her management team are worried about the lack of gay support for her more mature, ballad-heavy CD. "They're taking the album off the [release list] and retooling it," said my source [a confidential informant at the record label, who begged to remain anonymous]. "They're going to add 2 more songs with a club beat to send the gays to the dance floor."

Perez Hilton posted around that time that he does "not like the album AT ALL." That said, we don't think they actually added any songs since the leak.

The gay-marriage-legalization-downplaying New York Post, who earlier posted a story about Columbia expecting the Beyonce record to flop, don't like it either. The Daily News's Jim Farber on the other hand likes it (The Daily News also differed from the NY Post by actually doing cover stories on the legalization of gay marriage).

Speaking of Jim Farber, his other big Daily News article today was about "girly men" music ("everyone from [Bon Iver to] Sufjan Stevens to Devendra Banhart to Antony and the Johnsons to Iron and Wine to Grizzly Bear to the National to Fleet Foxes to Vampire Weekend"). He adds, "Snaking back a bit farther, you could also throw into this high-brow/low-virility crew Bright Eyes, the Decemberists and Death Cab for Cutie."

(so just to recap for a second: Gay people don't like the new Beyonce album. The NY Post doesn't like gay people, but does like Beyonce. The Daily News, despite a bit of homophobia, likes gay people and Beyonce.).

I think the Beyonce album's pretty good, except for the severely out-of-place lead single "Run The World (Girls)," which unfortunately is the only track with an official video so far (watch below). Most of the album's non-singles are the ones that demand repeated listens. Its highest points are hit when she belts out Etta Jamesian choruses like that of "Start Over," the earworminess of "Countdown," and the fact that its the first album since her debut to feature a member of Outkast (how bout that new Outkast album?). You can decide for yourself by streaming it. Buy a copy on Amazon.

The upcoming Good Morning America lineup also includes Mary J Blige on September 2, and Debbie Gibson & Tiffany, who are going on tour, on July 29. The full list of mainstream acts (like Beyonce and now Florence) that are playing the popular TV show's series is below.

Florence & Beyonce videos and stuff below too...

Florence on GMA at Rumsey Playfield

Florence - You've Got the Love @ SUmmerstage

Viewers interested in joining "GMA" in Central Park are encouraged to arrive at Summerstage Rumsey Playfield via the 72nd Street entrance on Fifth Avenue at 6 a.m., when the park opens to the public.

With the exception of Lady Gaga being a free, ticketed event, all concerts are free and open to the public and will take place live during "Good Morning America," Fridays from 7 to 9 a.m. ET. Dates and additional acts will be announced throughout the summer.