Florence at Creators Project in 2011 (more by Ryan Barkan) 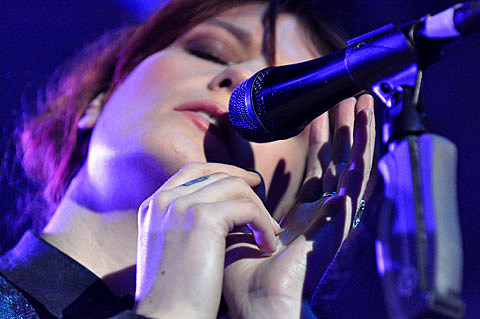 Florence and the Machine have an extensive international tour scheduled which includes the Summer Soul Festival in Brazil this week, a number of summer festivals, and many headlining shows in between. They'll make their way over to North American in April and May surrounding their performances at Coachella. The tour hits NYC on May 8 at Radio City Music Hall with support from Blood Orange. Tickets are on AmEx presale now and go on sale to the general public on Friday (1/27) at 9 AM. While Florence is in the area, she'll also play Mohegan Sun Arena in CT (5/11) and the Borgata in Atlantic City (5/12). All dates are listed below.

Florence's most recent single from 2011's Ceremonials, "No Light, No Light" was released last week b/w remixed by Dave Sitek and Breakage. You can purchase it on iTunes or grab the limited edition on vinyl via Flotique. The video for this track is below.

Speaking of Blood Orange, you can catch him in NYC much sooner when he plays his first headlining NYC show at Glasslands on February 25 with support from D-Video and Physical Therapy (DJ). Tickets are still available.

--
Florence + the Machine - "No Light, No Light" Official Video