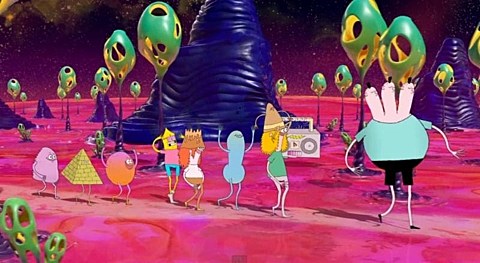 Australian beatmaker Flume recently announced some dates surrounding appearances at Coachella and the South American Lollapaloozas, including a NYC show happening on April 14 at Highline Ballroom. That show quickly sold out, but Flume's since expanded his tour and added another big NYC show happening on July 18 at Terminal 5. Tickets for that show go on sale Friday (3/21) at noon with an AmEx presale starting Wednesday (3/19) at noon. Updated dates are listed below.

Flume is also giving the deluxe edition of his 2012 self-titled debut a vinyl release on April 15. The deluxe edition features collaborations with Freddie Gibbs, Ghostface Killah, Autre Ne Veut, Killer Mike, Twin Shadow, How To Dress Well, Stalley, and more, and Flume's just made a video for "Space Cadet" which features Ghostface and Autre Ne Veut. The animated video was directed by Jay Howell (Bob's Burgers) and Jim Dirschberger, who works with Jay on the Nickelodeon cartoon Sanjay and Craig. You can watch that video, with the list of tour dates, below...