Flying Lotus at LPR in 2012 (more by Amanda Hatfield) 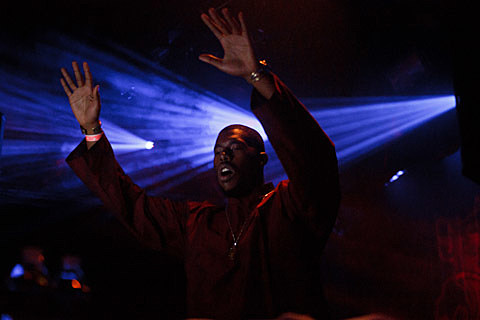 As mentioned, Flying Lotus is playing a NYC show on May 5 at Terminal 5 with Thundercat, as part of the upcoming Red Bull Music Academy NYC residency. It's since been announced that the Terminal 5 show is part of a larger tour FlyLo and Thundercat will be on, and Nigel Godrich's Ultraista is on many of the dates, including the NYC show, as well. Tickets for the NYC show are still available.

The Red Bull Music Academy shows also include a previously mentioned Brainfeeder Session at Music Hall of Williamsburg on April 30 which Erykah Badu is DJing (under the name DJ Low Down Loretta Brown). We're not totally sure who else is going to be there, but we wouldn't rule out Flying Lotus himself making an appearance. Tickets for that one are still available.

FlyLo will also be at SXSW for both Flying Lotus shows and Captain Murphy (his rap alter ago) shows. As mentioned earlier today, some of those Captain Murphy shows are collaborative sets with Earl Sweatshirt.

All Flying Lotus dates are listed, along with a live video, below...