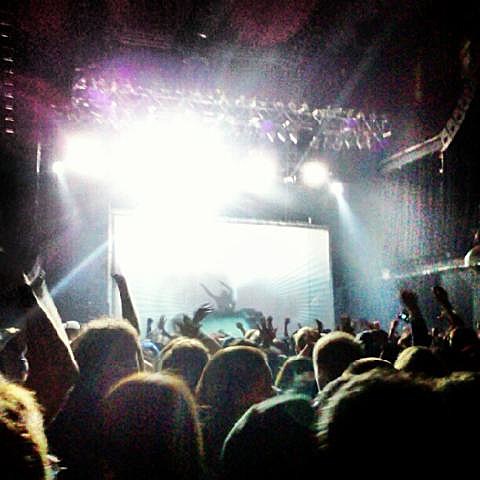 Flying Lotus played Terminal 5 last night (10/7) as part of his NYC Takeover and you can watch video of his T5 performance at the bottom of this post. The takeover also included a stop at the Warp Records booth at the Brooklyn Flea Record Fair on Saturday (10/6) and continues on with a Boiler Room NYC performance tonight (10/8, guest list only but can be streamed live) with Questlove, Flatbush Zombies, Just Blaze, Joey Bada$$ & Pro Era, and The Underachievers; and a visit to the Apple SoHo store on Tuesday (10/9) and more.

Additionally, on Wednesday (10/10) there is the Brainfeeder Session NYC show at Villain in Williamsburg that features The Gaslamp Killer, Martyn, Dorian Concept, Jeremiah Jae, Taylor McFerrin, The Underachievers and "very special guests." Could FlyLo be that special guest? That show is free but you do need to RSVP (which is now open).

Additionally, he'll be here next week for CMJ for a show at Le Poisson Rouge on October 17 with Death Grips.

Video from Flying Lotus' Terminal 5 show is below.