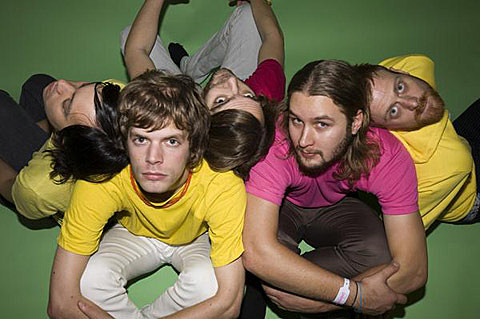 Didn't the weeks leading up to CMJ used to be a little calmer? I feel like we're just going to be pile-driving into that week (Oct 19 -21) with show after worthwhile show. This week / weekend too. Even with Matador 21 and Pop Montreal siphoning lots of big names, this is one of the more more exciting weekends for shows in a long while. For me at least.

Let's start this week with a contest. As previously mentioned, BV/TWII faves Casiokids play Sunday (10/3) night at Glasslands and we've got a pair of tickets to the show plus a copy of the band's CD, Topp stemning på lokal bar, for one lucky person. To enter, just send an email to BVCONTESTS@HOTMAIL.COM with the subject line "Casiokids" and we'll pick a winner at random. Please note that Glasslands is a 21+ venue.

If you've never seen these Norwegians before, they're a lot of fun and Glasslands should be conducive to their low tech brand of dancepop. Also on the bill: Brahms, Bikini and VonChina. All Casiokids dates below. 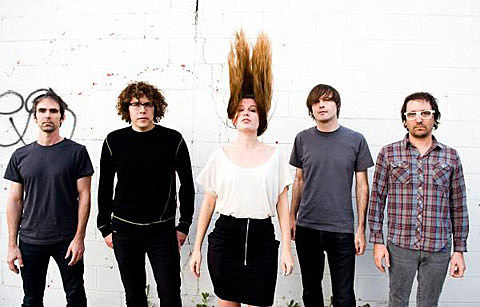 What else? San Francisco's Film School are in town, playing Glasslands on Thursday (9/30) and Mercury Lounge on Friday (10/1). Both shows are with like-minded New Yorkers The Depreciation Guild with whom they're going on tour. Film School have been doing the dark shoegazy thing since the start of the '00s, back when that sound was fairly unfashionable. But these days the '90s are hot so it's good timing that Film School have released maybe their best album yet, Fission.

I found 2007's Hideout to be murky and meandering, but the band seem really focused this time out. There are still the moody basslines and effects-heavy guitars, but the songs great this time out, and the production feels modern and bright. Some rays of light are peeking through their normally cloudy sound -- hell, their new single is called "Sunny Day." (You can watch the video below.) That song features lead vocals from bassist Lorelei Plotczyk, whose frequent presence behind the mic is one of the reasons Fission works so much better than Hideout. You can download "Heart Full of Pentagons" at the top of this post.

The Glasslands show also has Brooklyn duo Home Video who have been kicking around for half a decade or so and are set to release their second album, The Automatic Process, on November. Download first single "The Smoke" at the top of this post. I don't think I've seen them play live since they opened for Fujiya & Miyagi at Mercury Lounge back in 2006 but I remember thinking they were pretty good. And the new album sounds alright after a couple listens -- synthpop that seems equally inspired by Vince Clark and Thom Yorke. 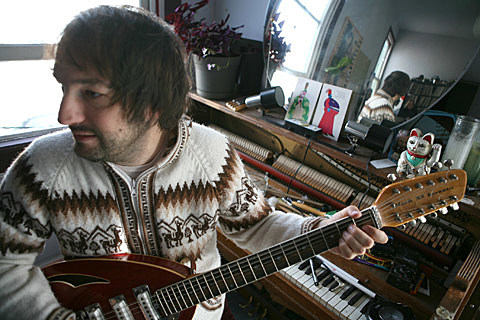 While we're in San Francisco, a reminder that Sonny and the Sunsets and Kelley Stoltz will be here this weekend: Mercury Lounge on Thursday(9/30) and Union Hall on Friday (10/1). Both shows are early ones, especially the Merc show which starts at 7PM. If you like '60s inspired pop at it's finest, do yourself a favor and go see this great double bill.

Stoltz is a charismatic performer, prone to anecdotes, occasional props and obscure impressions. Do pick up is terrific new album, To Dreamers, when it comes out in two weeks. And I'm really looking forward to seeing Sonny and the Sunsets (of which Stoltz is a member) for the first time. Their new album is great. Check out tracks from both of them at the top of this post.

Sub Pop just released a short film on the making of Stoltz new record, To Dreamers, made by the Yours Truly folks, which shows off his literal DIY approach to analog recording. It's funny and charming, just like Stoltz. Watch it further down this very post. 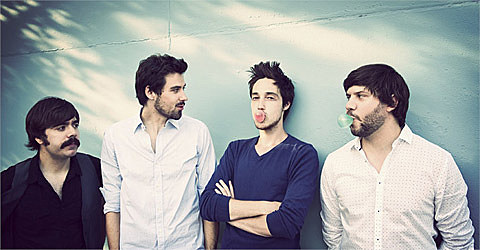 If you're not going to Pop Montreal this weekend, you can get a taste of Canada here in New York as Born Ruffians and Winter Gloves are here playing the Knitting Factory on Friday (10/1) and Bowery Ballroom on Saturday (10/2). Born Ruffians are a fine band but have been covered many times here and have been through town many times before. So I'm gonna focus on their touring mates Winter Gloves. The Montrealers schedule and cancel NYC gigs with frequency so now's your chance to see them.

I caught them at M for Montreal in 2008 and they were one of the highlights of that weekend, kind of a slinkier, funkier Tokyo Police Club. Their new album All Red is a lot of fun and they are definitely worth seeing. (They're quite popular in MTL.) Download "Plastic Slides" from the new album at the top of this post. 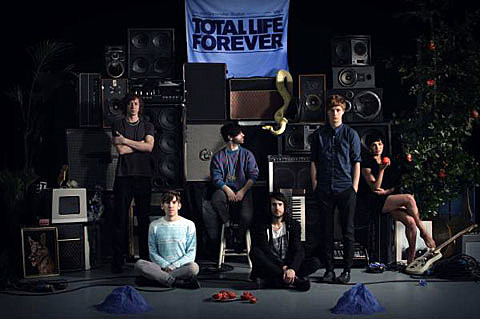 The show I'm most excited about this weekend is Foals who play Bowery Ballroom on Friday (10/1) and Music Hall of Williamsburg on Saturday (10/2). Both shows are sold out unfortunately, but tickets being released day-of-show isn't an uncommon occurrence.

Foals' new album, Total Life Forever, is one of my contenders for Album of the Year which is not something I was really expecting before I heard it. Where their first album, Antidotes, was all mathy angularity, Total Life Forever has...um... soul? There's also a Big '80s Trevor Horn vibe going on -- the drums on single "Miami" seem to be lifted from Yes' 90125 LP. (Or maybe The Power Station.) It's funky and genuinely danceable, with a lot of heart. Foals used to be easy to like hard to love. Not so hard this time out.

Foals have always been good live, full of nervous energy -- they're the only band I've ever seen puke onstage -- and can't wait to see them with such stronger material.  I can't wait for Saturday.

If you're going to the Bowery show on Friday, definitely get there in time to see openers Esben & the Witch who just signed to Matador and are a bit like Zola Jesus but more interesting to watch live. Their guitarist has the most pedals I've ever seen not counting The Edge. They were pretty good at Glasslands last week. 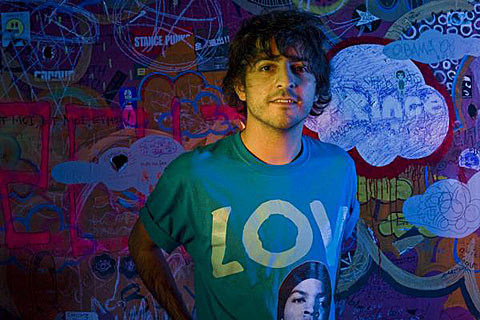 And finally, El Guincho returns to NYC this week for a string of shows that began last night at Mercury Lounge. He plays Santos tonight (9/29), a free show at Zebulon on Thursday (9/30) and a late night show at Cameo on Friday (10/1).  When I saw him play two years ago at Mercury Lounge opening for Cut Copy it was just Pablo Díaz-Reixa and his sampler, but this time El Guincho is a trio which should make things a lot more interesting and fun.

El Guincho's new album, Pop Negro, eschews the dreamlike haze of his debut (which was a real precursor to the chillwave invasion) for more straight up dance pop that is definitely not low-fi. In his own words:

It's a pop album sung in Spanish. Tracks are based on big syncopated beats, loud kick drums, snares and claps on a very wide stereo image full of different synthesizer timbres, subdivided hi-hats, funk bass, line recorded guitars and multi tracked backing vocals. Production is based on hi-fi aesthetics from the golden era of recordings...the main sentiment is a sort of nostalgic love for the music that I heard on FM radio as a kid/teenager, that "promise" that music gives you, not eternal/eternity because pop music is not supposed to be like that, but that thing you feel when you're on a car with your friends or family and you listen to a certain hit and it makes you think you want to be inside of that. I wanted to write something based on that. Not plain hits, but a whole album that makes you feel that thing, arrangements that can take your mind that state if you know what I mean.

That's gonna do it for this week. A few daily picks not covered above follow:

If you didn't get enough '90s nostalgia last week with Pavement, former indie rock power couple Juliana Hatfield & Evan Dando (they did date, right?)perform together as Jullianna & Evan.  Julianna has intimated she might retire from live shows in the near future, this seems like a good way to see her one last time. They play Thursday too. Both shows are sold out, natch.

The forecast is calling for "rain from Tropical Rainstorm" which might put a damper on the night's biggest show, Belle & Sebastian, who play the Williamsburg Waterfront with fellow Glaswegians Teenage Fanclub. A light sprinkle would be fine...B&S' music has always been sort of rainy day music anyway. If you ponyed up the dough for a ticket, do get there early for Teenage Fanclub who were phenomenal at Bowery Ballroom last night. Big hooks, bigger harmonies, positive vibes. Video of them playing Jimmy Fallon is at the bottom of this post.

Pennsylvania dream pop band SOARS play Glasslands. Haven't seen them live, but if you're a fan of Slowdive or bands that sound kind of like that, you might want to check them out.

Union Hall has a totally weird lineup tonight. Headlining is synthpop act Neighbors, with Year of the Tiger (kind of a more tuneful, less abrasive Sleigh Bells). So far so normal. But opening is Sky Ferreira, who has appeared in Uffie videos and is, if her Myspace is any indication, being bred as a Pop Star. Expect lots of old guys in suits at the show, at least till she finishes her set.

OK that's really it for this week. Tour dates, videos and flyers are below...