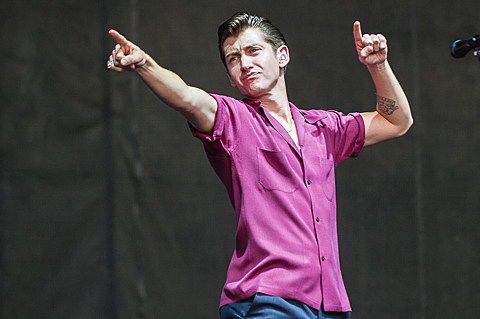 LA radio station KROQ is doing its annual Almost Acoustic Christmas from December 7-8 at LA's Shrine Auditorium. The lineup for day 1 was just announced, and it includes Queens of the Stone Age, Arctic Monkeys, Vampire Weekend, Foals and more. Tickets for day 1 go on sale Friday (11/8) at noon. Full day 1 lineup below.

There was some drama at the ceremony though, as it certainly sounded like Foals took a stab at Arctic Monkeys (via NME). Upon receiving their award, Foals' Yannis Phillippakis said, ""It shows you don't need a backing track, you don't need affectation, you don't need Elvis Presley impersonations." As NME points out, it seems pretty obvious that he was talking about Alex Turner with the Elvis impersonations bit.

Vampire Weekend, Arctic Monkeys, and Foals have all played NYC this year. Queens of the Stone Age are about to, when their tour hits Barclays Center (12/14) with The Kills (tickets).

Meanwhile, Vampire Weekend just had to cancel some European dates.