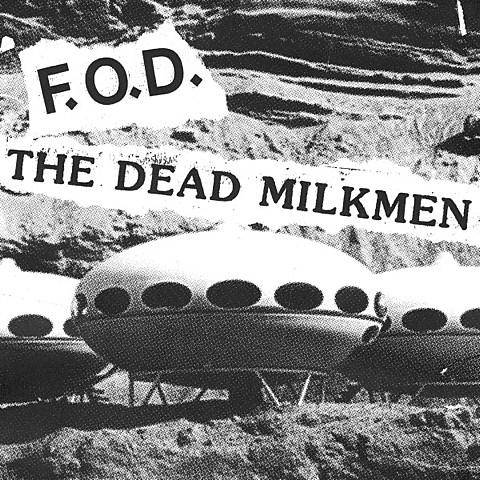 Over the summer, F.O.D. aka Flag of Democracy (who recently reissued an album) and The Dead Milkmen (who recently made a new one and played Riot Fest) announced they'd be unearthing a split that they recorded together in the '80s. The announcement read:

What we have here is pretty incredible. This is a lost record from 1985. We didn't find the tapes, or the reels, we found the actual records!!! This was recorded and pressed sometime in 1985 for the Datchord label. While working on The Great Rock N Raoul Swindle comp tape, the Datchord label decided it was probably a good idea to make a "real record" if they wanted people to take them seriously. They got their good friends FOD and THE DEAD MILKMEN to record tracks for a split 7″. Both bands handed in their tracks but it never materialized. Meanwhile behind the scenes, the guys from Datchord had talked a young friend into financing the record on his parent's credit card unbeknownst to them. Unfortunately the shipment of records and the invoice showed up at their house while the young man was at school but his folks were home. The parents told him they sent the records back the pressing plant, but here 30 years later, that young man has come home to help his folks move into an assisted living home only to find the records, the plates and the original xeroxed art for the cover in the back of the basement!!! He turned them over the bands and here they are! We assembled the records and they are ready for your listening enjoyment!

The FLAG OF DEMOCRACY songs fit perfectly in between their classic Love Songs EP and the Shatter Your Day LP. Fast, snotty teenage hardcore. THE DEAD MILKMEN track on here is like a missing piece from Big Lizard in My Backyard... because it is! Recorded at the beginning of the sessions and mixed in a hurry to have it in time for this split, this song is perfect early MILKMEN, and you've never heard it before.

That WOULD be pretty incredible! ...but now we're not so sure if it's all true. Find out more and pre-order HERE.

What we are sure about is these songs sound pretty great. Check them out for yourself: a full stream of the split premieres below, and the record hits stores on October 30.

F.O.D. has two more splits coming out too. One is with Brazilian band Merda, and the other is with the now-defunct Ex Friends, who share(d) members with Plow United and Beach Slang. Both of those come out on November 27.