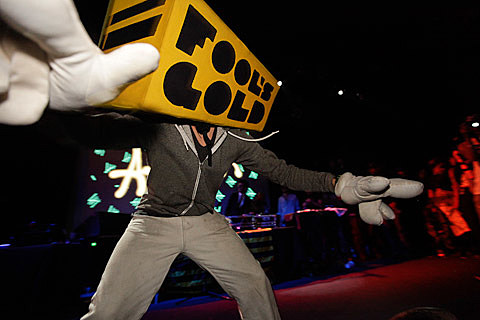 A-Trak and Nick Catchdubs' Fool's Gold Records will celebrate their sixth anniversary as a label with a show on November 22 at SRB Brooklyn (177 2nd Ave). This year's show will include Southern rap vet Juvenile (aka the guy who's huge for "Slow Motion" and "Back That Azz Up"), A$AP Mob collaborator Bodega Bamz, Brooklyn producer Brenmar, Philly rapper GrandeMarshall, Action Bronson collaborator Party Supplies, Montreal producer High Klassified, label co-head Nick Catchdubs and special guests. Tickets for the show are on sale now. Flyer below.

This show happens right after Bodega Bamz wraps up his tour with Flatbush Zombies (who played last year's Fool's Gold anniversary). As discussed, about two weeks later, the two will team up again in their shared hometown of NYC for a show on December 3 at Irving Plaza. Tickets for that show are still available.

Speaking of Party Supplies and Action Bronson, Blue Chips 2 (the sequel to the collaborative 2012 mixtape Blue Chips) is out now. You can stream it, along with updated Bodega Bamz dates, some videos and the Fool's Gold flyer, below...

Juvenile - "Back That Azz Up"