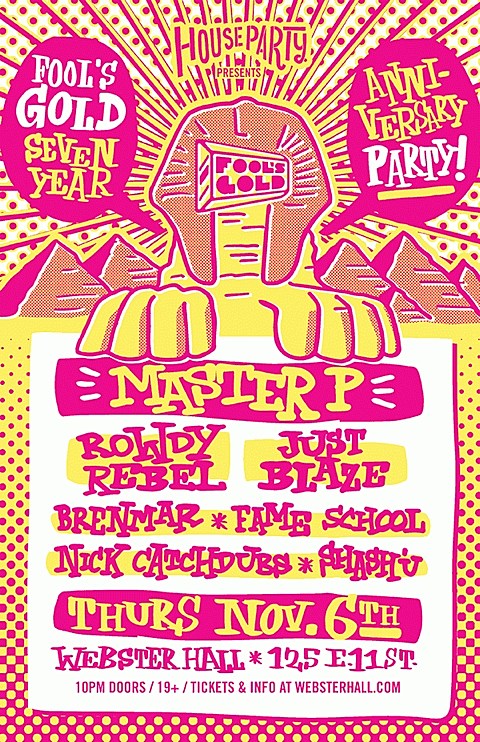 Fool's Gold Records, the hip hop/electronic label run by A-Trak (who played Baby's All Right on Tuesday) and Nick Catchdubs, will be celebrating their 7th anniversary in NYC on November 6 at Webster Hall. The late-night celebration (10 PM start) doubles as one of Just Blaze's weekly House Parties and includes veteran rapper/actor/NBA player/sports agent/writer/producer/director Master P, as well as Rowdy Rebel, Just Blaze, Brenmar, Fame School, Nick Catchdubs, Shash'u, Electric Punanny, Jasmine Solano and Melo-X in the Grand ballroom + Balcony. The Marlin Room will have Va$htie, Oscar, Huggy Bear and Deemehlow. And the party in the Studio will be hosted by Dirty South with special guests. Tickets are on sale now. Flyer above.

If you want to spend the full night at Webster Hall, the 8 PM show in the Studio is Dean Blunt, Gobby, and Loren Connors (tickets), which will also be a good one ...or you could see Shaggy in the Grand Ballroom.

In related news, A-Trak is releasing the Full EP next week (11/4) digitally and on November 25 physically via Fool's Gold. Stream the single "Push," featuring Andrew Wyatt of Miike Snow, via Spotify below...