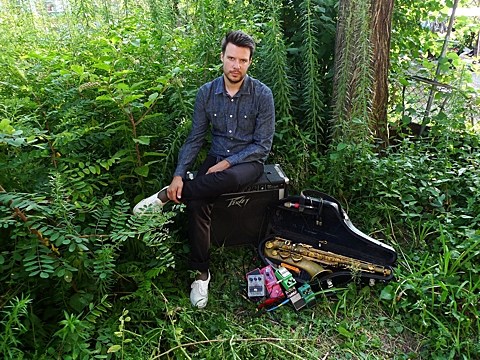 Matt Nelson, who you may know as one of the saxophonists from tUnE-yArDs' w h o k i l l album and tour, is releasing his debut solo album called Lower Bottoms on October 21 via Tubapede Records (pre-order physical and digital). Its new single "To Believe In What" is an experimental sax workout and that premieres in this post. Listen below.

Matt has some solo shows coming up including two in NYC. First, he plays a trio set at The Stone this Saturday (10/4) at 8 PM with bassist Henry Grimes and drummer Ches Smith. Then he plays a Lower Bottoms release show on November 16 at Snugs (61 Bergen St) in Brooklyn. Additionally, Matt plays as a member of Battle Trance (who have a new album out on NNA Tapes), and they also have dates coming up including an opening slot at the MHOW (10/10) stop of the Buke & Gase tour. Palm are on that show too and tickets are still available.

All Matt Nelson solo dates and Battle Trance dates are listed, with the new song, below...

Matt Nelson - "To Believe In What"