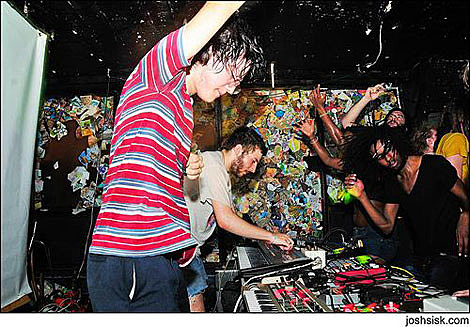 You don't hear too much from Celebration lately. Well, not totally true. The Baltimore band, known for being tight with Brooklyn's TV on the Radio, are credited as collborators on the new Holly Miranda album that was co-produced by TV on the Radio's Dave Sitek. And this Saturday night, February 21st, Celebration plays a Brooklyn show at Glasslands - the very venue members of TV on the Radio have turned up to play with their side projects in the last few weeks. TV on the Radio also have a NYC show coming up. Holly Miranda has a couple too.

Sound Fix Records, the venue, is not long for this world. Upcoming free shows there include a Friday night (tonight) performance by The Forms, and a Saturday one by Howlies. Tonight's Forms show, presented by Guilt by Association, also doubles as a Sound Fix benefit show, so look for the tip jar as its being passed around. Howlies' record "Trippin With Howlies" is out now. That is the occasion they'll be celebrating when they come back to town to play Death By Audio on February 26th.

Telepathe have been added to the Ladytron and Faint tour in April. That means they'll be playing Webster Hall on the 10th and 11th of that month. No need to wait that long though. In addition to some shows at SXSW in March, you can catch Telepathe twice in NYC this weekend, courtesy of Todd P. Tonight, February 20th, the show is at Market Hotel with These Are Powers, Teengirl Fantay, Soft Circle and Katie Eastburn. Saturday they play with Teengirl Fantasy, Hawnay Troof, and Silk Flowers at 92Y Tribeca. Todd P says...

Especially excited about the 2 shows this weekend featuring TEENGIRL FANTASY from Oberlin, Ohio. Teengirl Fantasy, aka Logan Takahashi and Nick Weiss, are two young guys currently attending Oberlin College, together they make drum machine and sampler heavy dance music that steals as much from the underground noise scene as it does from the dance world. Teengirl Fantasy smash those influences to make transcendently catchy adrenaline anthems that get everyone dancing.

Teengirl Fantasy remixed one of Telepathe's songs. Listen to it in the video below...