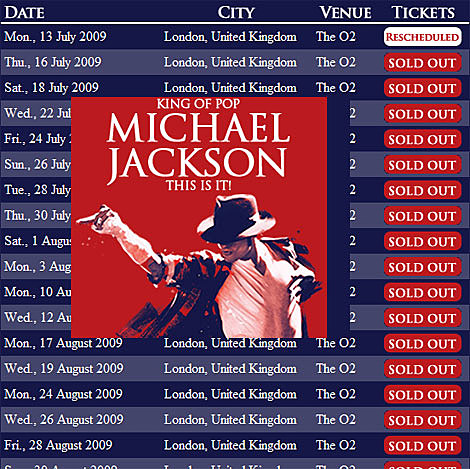 Michael Jackson's planned 50-show run at the O2 Arena in London would have been the highest-grossing single concert engagement. Now it's a major problem for the promoter AEG Live.

More than $85 million worth of tickets have already been sold for the series of performances, which have the now sadly ironic title "This Is It." As much as $30 million has already been spent on production, according to sources close to the situation. So what's at stake for AEG, the world's second-largest concert promoter, can't be overstated.

...AEG Live CEO Randy Phillips told Billboard May 12 that his company was well-insured. "We have one policy in place and we're negotiating for an even larger binder," said Phillips, who couldn't immediately be reached for comment regarding Jackson's death. "We have insured the production costs. In order to get the first part of the insurance in place, [Jackson] had to have a physical, and he passed it with flying colors." AEG CEO Tim Leiweke made similar comments in March at the Billboard Music & Money Symposium... [Billboard]