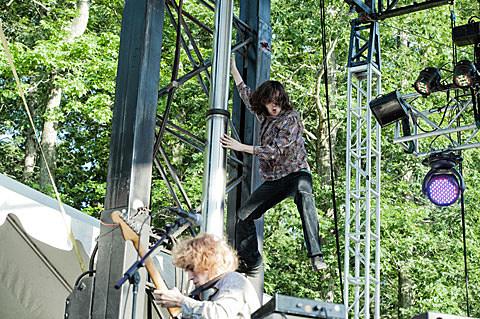 Foxygen's Sam France is a wildcard frontman, prone to funny anecdotes, nonsequeitors and the occasional outburst, fully diving into his performance. And sometimes the crowd. He's also fond of climbing, as seen in the above picture from their performance at last weekend's Firefly Music Festival in Dover, DE (which he did without incident). A similar excursion up the scaffolds the next day at Wilco's Solid Sound Fest wasn't tolerated as much by security there. Loyal BV reader Joe wrote in with this report:

The only bullshit that went on was when Sam from Foxygen started climbing a stage truss (mind you it was the smallest stage at SS). A security guard ran over and ripped him down (see video below)...The video doesn't show it - but they exchanged words after Sam got back up to his feet...

...Given the SXSW incident - I honestly thought Sam was going to storm off. But no - he handled it like a pro and even made light of it.

Video of the incident is below.

Foxygen's next NYC show is a free one on July 25 at Hudson River Park's Pier 84 as part of the River Rocks 2013 with Thao & the Get Down Stay Down opening. The band have announced some fall tour dates as well -- no additional NYC show, at least not yet -- and all are listed below.