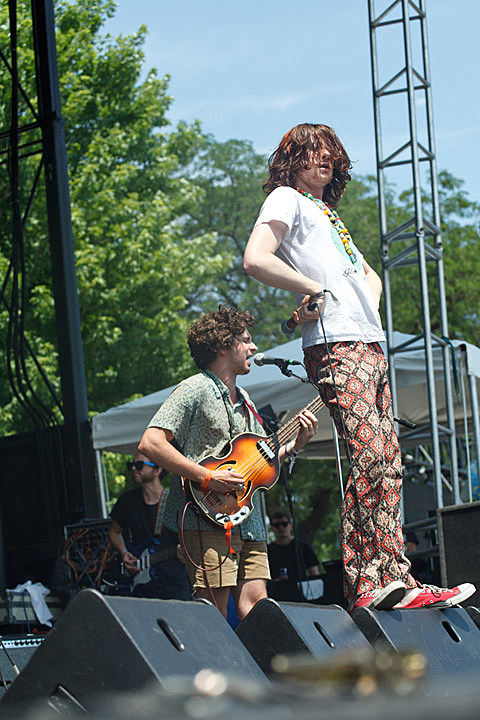 Foxygen, who were just in NYC for a free River Rocks show (and will be back this fall, see below), have had a few PR stumbles this year but now have suffered a literal one. Frontman Sam France, who has been prone to climbing things onstage of late, fell off a stage monitor during the band's first song at Minneapolis' First Avenue last night (7/29), toppled into the crowd, injuring his leg. From a firsthand report to Citypages:

It was a short set. The band had only just started the first song, "On Blue Mountain," when outrageous Sam France started his aggressive set that turned out poorly, too quick. While engaging with the audience, seemingly overtaken by performance, France leaned on the front monitor, which seemed to tip forward. He fell toward the crowd was apparently injured as a result of hitting the front barricade railings.

At first it wasn't clear if he was hurt or where he was because an audience member that resembled him grabbed the microphone. The band continued to play for a few moments and then security became present. Jonathan Rado regretfully informed the crowd, "If we have to cancel, we'll come back and make it up to you, okay? We love you. Sorry."

France was carried out on a stretcher and the show was indeed canceled. He's having surgery today, which has canceled the band's upcoming shows in Vancouver (8/1) and Seattle (8/2). From the band's Twitter:

Still a chance that @pickathon shows will happen, though they might be subdued performances. It all depends on healing & travel time. On the bright side, Sam will probably have a cool cane or something.

Foxygen were on tour with Chicago's Twin Peaks, who will be in NYC in October.

Meanwhile, Foxygen have just announced two NYC shows in the fall: Bowery Ballroom on October 21 and Music Hall of Williamsburg on October 22. Tickets for those shows go on sale Friday (8/2) at noon with an AmEx presale Wednesday (7/31) at noon.

Feel better, Sam, and we wish you a speedy recovery. Foxygen tour dates are listed below.