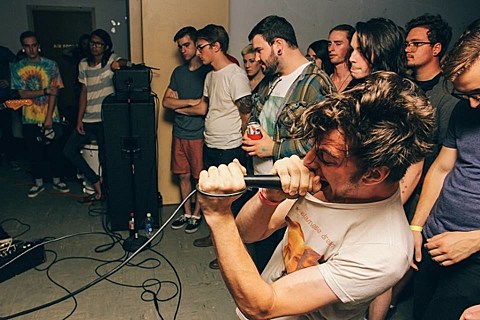 Gainesville screamo band Frameworks were one of the (many) bands on this year's Topshelf sampler that caught my ears with their contribution, "Old Chokes," the final track on their four-song Small Victories EP that came out via 13th Floor Records earlier this year. It's both an atmospheric and an anthemic take on the sort of pg.99/Envy/etc-style screamo that's been making a great comeback via some very solid bands lately, and the rest of the EP lives up too. Take a listen to the whole thing below.

More recently, Frameworks contributed a new track, "Preamble" (also streamable below) to a four-way split with Kittyhawk, Prawn, and Droughts. And not long after that, it was announced that they signed to Topshelf Records and will release their debut full length on the label in 2014. They're recording the record with Comadre's Jack Shirley (who did Deafheaven's Sunbather and Joyce Manor's Of All Things I Will Soon Grow Tired). Details are still sparse on that album, but stay tuned.

Meanwhile, like a zillion other punk bands did, Frameworks just played their hometown festival The Fest in late October, and we're premiering a pro-shot video (by Light & Noise) from their set in this post. I've yet to actually see them live, but from the looks of this video, their show tops all of their studio recordings to date. The band's as precise as they are aggressive, especially singer Luke Pate, who's got the mic cable wrapped around his neck the whole time and recklessly falling into the crowd. Check out the mayhem yourself in the video below.

And if you want to actually see Frameworks live, they've got a number of West Coast/Southwest dates coming up, including shows with fellow throat-shredders Code Orange Kids, Caravels, and Calculator. All dates are listed, along with the video and streams, below...

Frameworks at The Fest 12