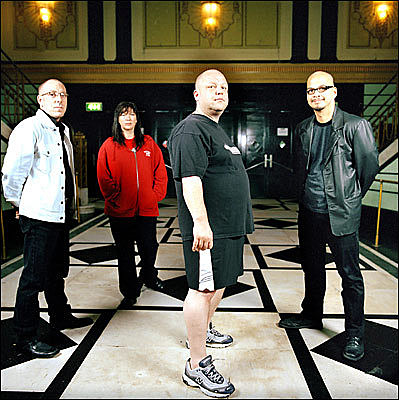 Pixies are back again - so far with just one UK date: June 14th at the Isle of Wight Festival (featuring Neil Young and more - tickets on sale here). "More [shows] to come", as promised by the band's Myspace. 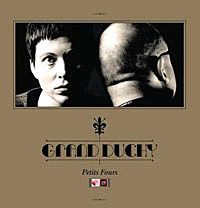 Meanwhile, Frank Black and Violet Clark (husband+wife) have recorded a full-length as Grand Duchy. The record, Petits Fours, will be out April 14th in the US on Cooking Vinyl (out now in Europe). Track list below. The group's Myspace also asks for "submissions of an artistic nature for the creation of a compendium of Grand Duchy-themed art."

Frank Black's BlackFrancis.net cryptically speculates: "The negotiators continue the discussion about BLACK FRANCIS concerts for this year of the Ox 2009. Acoustic? 3 piece? GRAND DUCHY? PIXIES? Duets with movie stars? Poetry slam? Art exhibition? WHO SHALL KNOW THESE THINGS? Checking the site of blackfrancis.net can be a habit to have!!" Part of that picture is put together above, with certainly more to be announced.

Black also recently produced Art Brut's third LP Art Brut vs. Satan out April 20th (Europe on Cooking Vinyl) and May 12th (US on Downtown Records). The first officially released track "Alcoholics Unanimous" has a video which was posted here on Sunday and can also be watched below.

A book on the Pixies, Pixies: In Print, recently came out on Rock Reader Books. The 1,000-copy first printing "collects all of the revered and influential band's essential press interactions. Focusing on the group's 1987 - 1992 heyday and its subsequent 2004 - 2007 reunion, PIXIES: IN PRINT chronicles the history of the Boston-bred musical icons through essential interviews, essays and articles."

And, as previously mentioned, Kim Deal and The Breeders are curating/playing ATP UK Weekend 2 May 15-17. Full line-up, the Grand Duchy track list, some videos, and more below...

"I love the first Frank Black And The Catholics album" explains Eddie.

"He did that in one day. It made me think-that's how I want to records to be made. So we came to the conclusion, let's ask Frank Black to produce it, and do it like that"

To the band's surprise, Black - a fervent fan- said yes.

Accordingly, the band found themselves packing their bags and heading for Wavelength Studios in Oregon last December.

Eddie: "The studio Frank uses is in Salem. It's in the middle of nowhere. We were staying by the motorway, and he'd pick us up in his car every day. We'd do eight hour days then back to the hotel. We did the whole thing in twelve days. It was very simple."

With the band set up in one big room, their amps in the kitchen and Eddie singing his vocals in a cupboard ("It was ok, I had drinks in there") they set about exorcising the demons of the previous two years.

"I had an album's worth of songs written, but once we got there we wrote four or five new ones. It all just flooded out."