Frank Frazetta's Dark Kingdom from 1976, which was the basis for the Molly Hatchet album cover Flirtin' with Disaster 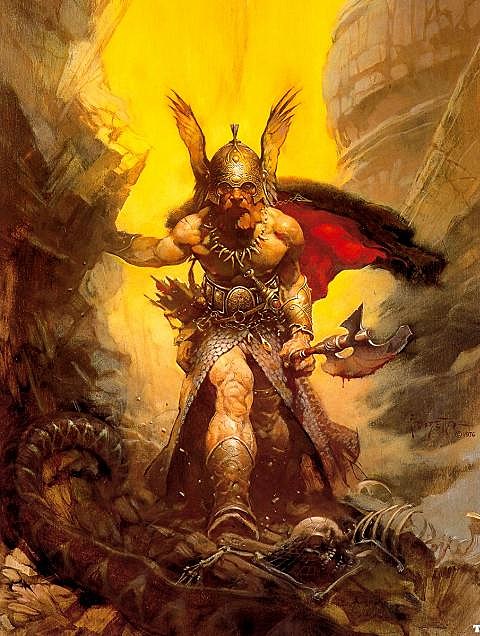 Frank Frazetta is one of the most prolific and well known illustrators of the 20th century, ...due in part to the variety of media in which his art has appeared (comics, posters, album covers, books, etc.), but also to his very recognizable style. ...He received formal art training at the Brooklyn Academy of Fine Arts... [and] entered into the world of comic book illustration at the age of 16, with work on Shining Knight comics. His early work was for DC, but he later did work for Timely (Marvel), Standard, and Toby.... In 1952, he worked as an assistant for Al Capp ("L'il Abner"), but quit in 1960 after disagreement over salary cuts. He turned to paperback cover illustrating to pay the bills. While not very lucrative at the time, the illustrations are today sought by many collectors, especially his work on the Edgar Rice Burroughs titles (Tarzan, John Carter of Mars, and others). In the mid 60s Frazetta joined other former EC cartoonists at Warren Publications, where he worked on "Creepy", "Eerie", and helped design Vampirella. Frazetta's work was probably at its most popular in the 1970s, where it could seen almost everywhere. His drawings were and are instantly recognizable - the men are impossibly muscular, the women are supernaturally beautiful, and the monsters are indescribably hideous. -[imdb]

Frazetta had his hand in designing album covers for bands like Nazareth, Molly Hatchet, Yngwie Malmsteen, and most recently, the cover of Wolfmother's self-titled LP. He was the subject of the 2003 documentary Frazetta: Painting with Fire. Frazetta died of a stroke today after feeling ill after a Mother's Day dinner last night. R.I.P. Frank Frazetta (February 9, 1928 - May 10, 2010). Some videos below...