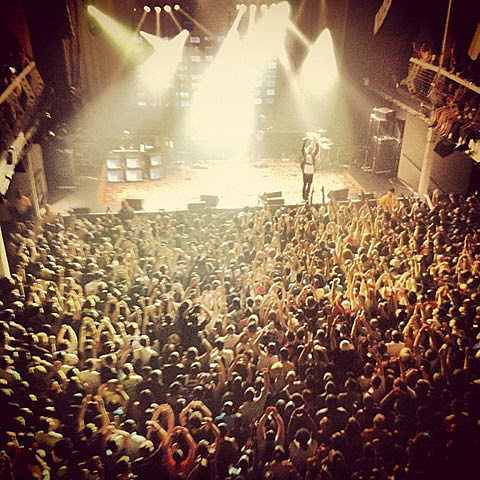 No openers or special guests at Terminal 5 last night (7/26), but Frank Ocean, backed by a full band, was pure sex. From start (with a Sade cover at 9pm) to finish (10:15), the entire three-tiered room was going nuts and sang along while Frank effortlessly played songs off Channel Orange, arguably the best album of the year. Banter included acknowledgement of all the "trouble" he's been causing as he fearlessly and honestly introduced "Bad Religion" which, preceded by "Lost" and followed by "Pyramids", had the energy level in the Hell's Kitchen venue at record levels. Trash Talk and Odd Future buddies like Tyler the Creator, Earl Sweatshirt (who sang at the LA show but not in NY) and Left Brain, cheered Frank on from the balcony stage right. He closed the show with a one-song encore of "I Miss You", leaving everyone (missing him and) wanting more. For that he was just on stage alone sitting at a keyboard.

Check out the setlist and some videos below... 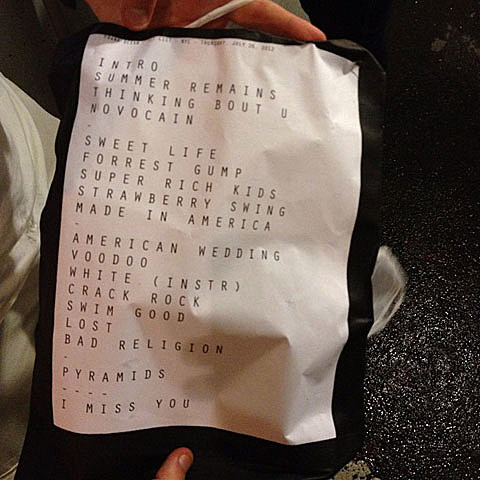 Frank Ocean - I Miss You (encore)

After Terminal 5 the whole crew headed to Best Buy Theater where Tyler and Earl played a headlining 10:45 set after Raekwon. After that they all (Frank included) hit 285 Kent for the free, BrooklynVegan-presented Trash Talk show... but more about that in a second... HERE.