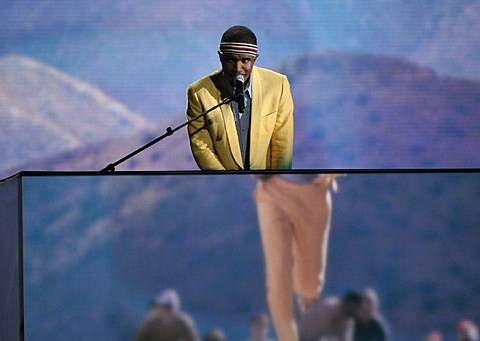 The 2013 Grammys went down last night (2/10), and here's a quick recap of some of the winners and videos of performances.

And of course, during the Awards Ceremony a number of artists gave performances, which you can watch videos of below. You can see Miguel and Wiz Khalifa doing "Adorn," Justin Timberlake and Jay-Z doing "Suit and Tie" and then JT doing "Pusher Love Girl," The Black Keys, Dr. John, and The Preservation Hall Jazz Band doing "Lonely Boy," Jack White doing "Freedom At 21" with his all-guy band (he also played "Love Interruption" with his all-girl band but no video of that at the moment), Frank Ocean doing "Forrest Gump" with a thematically appropriate visual backdrop, a big tribute to Levon Helm with Elton John, Mavis Staples, members of Mumford and Sons, Alabama Shakes, and others, and finally, LL Cool J, Chuck D, Z-Trip, Tom Morello, and Travis Barker doing "Whaddup" with a small piece of Beastie Boys' "No Sleep Til Brooklyn."