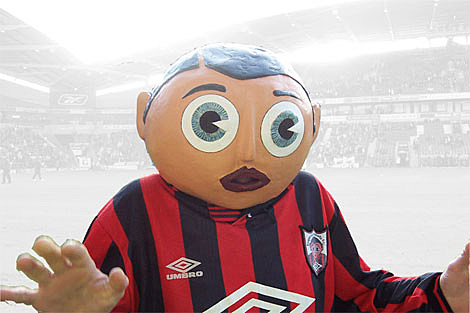 Right before the Wedding Present played at Southpaw last night, a guy appeared on stage wearing a paper mache mask. I excitedly thought, "oh my god it's Frank Sidebottom!" Never in my life did I think I would see him perform live. He's mostly unknown in America, but in the UK he's... uh... I don't know exactly what to say... I'll quote the Trouser Press:

"At first glance, Frank Sidebottom is just an idiotic soccer fan from Timperley (a town just outside Manchester) who performs inanely nasal renditions of popular songs -- accompanying himself in various musical modes, from rock to acoustic piano to a rinkydink synthesizer approximation of '20s ragtime -- while wearing an enormous painted papier-maché head. But what Chris Sievey (former leader of the equally prolific punk-era Freshies) has done as Frank Sidebottom is so completely over the top, so singlemindedly weird, funny and charming that one has to marvel at the wit and intensity with which he pursues his bewildering career."

Though Frank's been doing his thing since the mid-'80s, I have no idea whether he's played the U.S. before. It's the first time I've ever heard of it.

He only performed for 10 minutes at Southpaw, so I can't actually tell people to go see him, but it would be a diservice to the world to not let the New York public know that he is here. Seven more upcoming NYC-area shows are listed below, and here's some Youtube video of him on Tony Wilson's Grenada Reports in the mid-'80s: