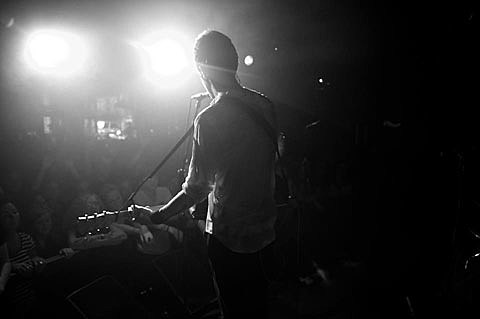 Frank Turner, who spends virtually all of his time on the road, played an intimate show at Knitting Factory last month, and is continuing to tour internationally throughout the rest of 2012. He'll return to NYC in the fall for a much larger, full band show at Webster Hall on September 30. Tickets go on sale Friday (4/27) at noon with an AmEx presale starting Wednesday (4/25) at noon. All dates, including a solo appearance at The Fest, are listed below.

In an interview with Pop-Break, Frank mentioned that his new album will be out in January, 2013 via Epitaph. Here's what he had to say about the album:

I've got a ton of songs hanging around right now in various different levels of finished-ness, and I found some gaps in my schedule to go into the studio, and I'm not the kind to be sitting around and waiting. I've got more than enough songs for one record, but I'm trying to get another whole pile finished to have a large selection to choose from and put the best ones on the record. Realistically, the new record will probably be out in January of next year. I'm excited about this new record. I think the songs are better than the ones that came before, and that's always a good feeling.

Meanwhile, Frank released a Record Store Day 7" of "I Still Believe" off of his 2011 LP, England Keep My Bones, and a cover of Queen's "Somebody to Love," which he's often covered live. The single will be out digitally on April 30. Check out a live video of him covering "Somebody to Love" at Reading Festival 2011 below.