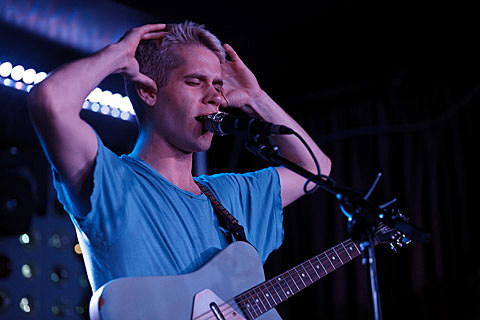 NYC's Frankie Cosmos has been playing a lot lately and last night (11/5) played what she's saying is her last hometown show for a couple months at the Little Big League record release at Shea Stadium. Her Double Double Whammy labelmates LVL UP and FC keyboardist Gabby Smith's band Eskimeaux opened the show. Anyone catch that? You can check out a short video featuring the choreographed dance moves of the Frankie Cosmos band, below.

Related band Porches recently scheduled their own hometown show happening December 12 at Palisades, also with LVL UP, as well as What Moon Things and Cantina. Tickets for that show are on sale now. It's their only hometown date at the moment.

Meanwhile, LVL UP also play Little Big League's Philly release show this Friday (LBL's last show before hiatus) and then they hook up with Saintseneca for a few dates on their tour including the NYC show happening Saturday (11/8) at Glasslands. NY indie rockers Palm are on that bill too, and tickets are still available.

All LVL UP dates are listed, with a recent video from Porches' new synthy single on Terrible, a recent Frankie Cosmos video, and the FC clip from the Shea show, below...