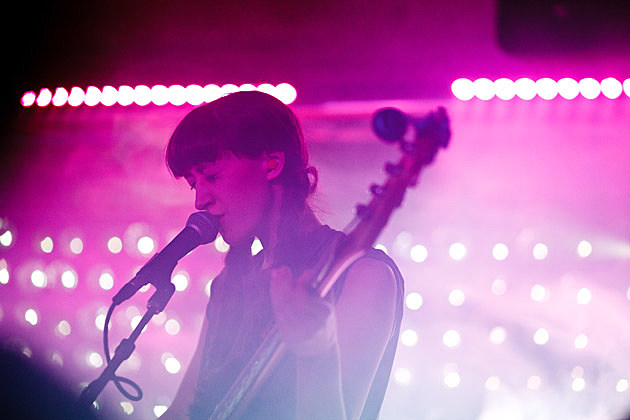 Frankie Cosmos has a tour lined up with related band Porches, including a small sold-out NYC show on May 26 at Elvis Guesthouse, but there will be at least two more chances to see her in NYC before that. One of those is TONIGHT (4/10) at another very small place, David Blaine's The Steakhouse, the Bushwick DIY spot where half of LVL UP lives. The rest of the bill features Trace Mountains (mem LVL UP), Alice, and a "super magic secret headliner." Any guesses? Girlpool? (Who are in town with no show tonight.) Porches?

Her next NYC show after that is May 17 at Brooklyn Bow Wow (1581 DeKalb Ave) with Gingerlys, Lost Boy? and DJ Doss. The event description reads: "We've curated a first ever pups & humans concert at Bushwick's favorite doggy day care, Brooklyn Bow Wow. Brooklyn Animal Resource Coalition (BARC Shelter) will be there to support the cause. There will be a bar and plenty of pooches to jam out with." Doors are at 6 PM and $10 gets you in.

After the Porches tour, Frankie plays the Bayonet Records Northside showcase at Rough Trade NYC on June 12 with Beach Fossils, Jerry Paper and Warehouse. Tickets for that show are still available.

Updated Frankie Cosmos dates are listed, with a video, below...