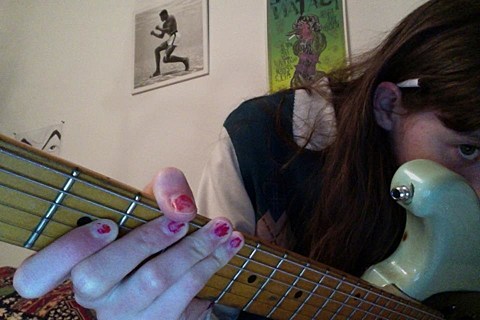 Frankie Cosmos is the project of singer/songwriter Greta Kline, who also plays in Porches, whose frontman Aaron Maine in turn plays in Frankie Cosmos. She's got a number of releases dating back to 2009 on her bandcamp, including this past June's Why Am I Underwater?. Her material hints at the type of understated anti-folk perfected by the Moldy Peaches, most notably Kimya Dawson. You can stream that recent release below.

Frankie Cosmos played a Brooklyn show last night at Shea Stadium (8/18) with Spook Houses (who are streaming their new split with Fat History Month). Did anyone catch that? She plays Brooklyn again tonight (8/19) at Silent Barn as part of the previously discussed lineup that also includes Advance Base, Krill, and Thin Hymns. Doors for tonight's show are at 8 PM and admission is $7 at the door.

Frankie Cosmos - Why Am I Underwater?