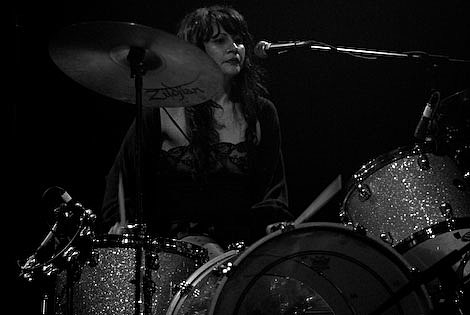 WebCuts Music: You've just had band practice -- how are you sounding today?

Dee Dee Dum Dum Girl: We're sounding great. I'll let you in on a secret we've had a line-up change so we have a new drummer and our bass player is now singing. It's been a pretty intense week of rehearsals. We've had a lot of ground to cover.

WebCuts Music: What's going on there? Is it musical chairs in Dum Dum Girls?

Dee Dee Dum Dum Girl: Not so much musical chairs, Frankie Rose was drumming for us and she also sang, so we have a drummer now who's just drumming. So it was a matter of teaching Bambi the high harmonies so that we would still have those.

WebCuts Music: Was that because Frankie was just too busy? She's spent that much time in that many times, did she have other stuff to do?

Dee Dee Dum Dum Girl: She finally has got her own project underway and has been working on a record and she's not the hugest fan of touring, she would probably do it for her own band. But it was probably time to do her own thing.

Thanks Anonymous for the link to the above interview which confirms that Frankie Rose is no longer a member of the Dum Dum Girls who are about to tour with Crocodiles and Vampire Weekend.

As previously also mentioned, Frankie (Rose) & the Outs play a Northside Festival show on June 26th. They also play another Brooklyn show on July 17th with at "TBA" with "Special Guests".

UPDATE: There's also a mysterious show this Wednesday night, June 16th, at Death By Audio which Frankie may or may not know something about.