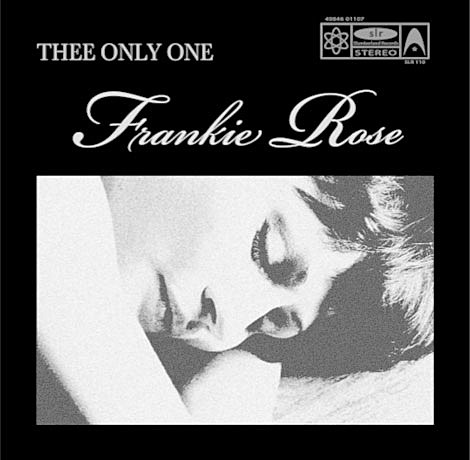 Frankie Rose is mainly known as a drummer, having played in Vivian Girls, Crystal Stilts, and Dum Dum Girls, but she's also a songwriter (she wrote VG's "Where Do You Run To?") and will be releasing her debut single, "Thee Only One," on Slumberland Records on October 27. She's also got a new band, Frankie and the Outs, who will make their live debut November 7th at The Woodser which will be the first show in a longtime for that South Williamsburg spot. Grass Widow is also on that bill.

With the new band, Frankie is sadly no longer drumming for Crystal Stilts. The split was amicable, guitarist JB plays guitar on her single. I'm told Crystal Stilts have a new drummer already, and the new Stilts lineup will even share a bill with Frankie and the Outs at two east coast Slumberland 20th Anniversary parties -- November 13th at the Black Cat and November 14 at the Bell House. (More on those further down the post.)

The Outs are a five piece, all girls, with whom Frankie will move from the drum kit to guitar (and vocals). The single's A-side is a two-and-a-half minute wall-of-sound pop that is what you might expect from someone who spent time in Vivian Girls and Crystal Stilts. (It could be the sister of CS's "Love is a Wave.") The B-side, "Hollow Life," is more unexpected -- organ-driven, harmony-laden, dreamy and drum-free, owing a lot to Spacemen 3.

Neither the A-side or the B-side of Frankie Rose's single has made it onto her MySpace page, but you can listen to her demo of "Where Do You Run To," a track the Vivian Girls only played once live. However, Frankie says it will be part of the The Outs live repertoire.

Frankie will be behind the drum kit, though, for the Dum Dum Girls upcoming CMJ shows. This will be an all-girl line-up, apparently, unlike DDG's live debut at the Woodsist/Captured Tracks Festival this summer that included Crocodiles' Brandon Welchez on guitar and Captured Tracks major domo Mike Sniper on bass. But that's only for these shows.

As mentioned above, Frankie and the Outs will play the two Slumberland Records 20th Anniversary shows at the Bell House and Black Cat. The full line-up for both shows is : Crystal Stilts, Brown Recluse, Pants Yell!, Frankie and the Outs; plus some reunions of classic Slumberland bands The Ropers, Nord Express, and Lorelei. It will be the first Ropers and Nord Express shows in ten years. Additionally, the Bell House show features a "special guest headliner." And as D.C. was the original home of the label, I wouldn't be surprised if some different special guests played that one too.

I think that is enough for one post. Tour dates and some videos below...

Vivian Girls - Where Do You Run To