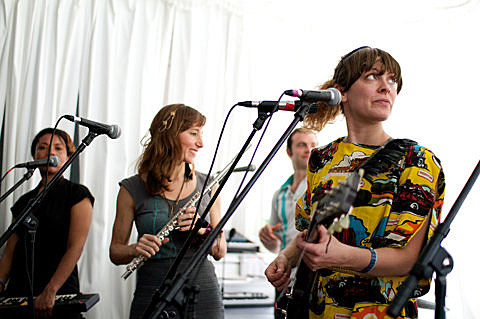 TV on the Radio's (new album and) Brooklyn show date has arrived, and though they're not listing any opener, I think there might be a surprise tonight at Music Hall of Williamsburg. Not a surprise at all is that Light Asylum is opening for TVOTR at RCMH on Wednesday. Tickets for that larger show are still on sale. AND, we have TWO PAIRS of tickets you can win to see the band headline Radio City. Want them? Details on how to win are below (all of TVOTR's dates are down there too).

Speaking of bands opening sold out shows at Bowery venues on 4/12 (today), Frankie Rose is the reason to show up early to the Go! Team's sold out show at Bowery Ballroom tonight.

Jesper Of Junior Senior DJs before The Go! Team play their set at Brooklyn Bowl on Saturday (their second of two NYC shows which are part of a short tour). That show is also sold out, though the venue says, "WE WILL HAVE A LIMITED AMOUNT OF ADMISSIONS TO RELEASE ON THE NIGHT OF THE SHOW STARTING AT 11:00 PM. ALL ADMISSIONS AT THE DOOR ARE FIRST COME, FIRST SERVE AND WILL BE $12, CASH ONLY."

Speaking of opening bands playing shows in Williamsburg on Saturday night, Little Scream is NOT. Sadly, at some point after it was announced, Little Scream dropped off the last six dates of Sharon Van Etten's tour to instead play some dates with Jose Gonzalez in Europe. Don't worry, everyone's still friends. BV Zach was actually at their final show together the other day at Lincoln Hall in Chicago, and he told me...

Little Scream announced that it was their last show on tour with Sharon Van Etten, and that it has been an honor to work with her. Little Scream consists of two strong female singers (playing guitar and violin respectively), plus an also guitar-toting drummer. Their sound referenced the likes of Andrew Bird-esque violin plucking, interwoven with streams of freak folk and choral arrangements. Later during Sharon's encore, all of Little Scream returned to the stage to take part in a cover of Fine Young Cannibals' "She Drives Me Crazy".

The good news is that Little Scream will make it back to NYC while on tour with The Antlers.

She Keeps Bees, not to be confused with Sea of Bees (I was actually confused until I wrote that sentence), have replaced Little Scream on the Brooklyn Bill. Megafaun also play that Brooklyn show and amazingly tickets are still available.

TO WIN A PAIR OF TVOTR @ RADIO CITY tickets: E-mail BVCONTESTS@HOTMAIL.COM. In the subject of the email, write "TVOTR". Include your first and last name in the email and two winners will be chosen at random and contacted back with more instructions ASAP. Good luck! (and note: your email will not be used for any evil purposes or shared or anything).