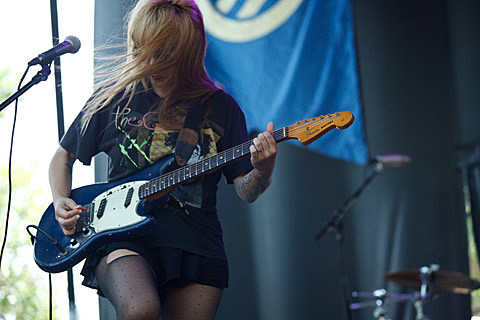 "Is it gross to swim in the lake?" asks singer and Brooklynite Frankie Rose. The festival isn't yet five minutes old but the opening artist's mind is understandably on the hot weather. Rose shrugs off the heat, however, and with her hair climbing all the way down her back, bathes her faint voice in dreamy echoes. The ex-Vivian Girls member's songs eschew muscle and embrace 80s synths. Satisfied early birds came to see her, she reminds the crowd that Phish and Pearl Jam are also playing concerts elsewhere tonight, and rewards the faithful with the brand-new "You Don't Need to Tell Me." Akin to Rose, it's pleasant but overly quaint, ideal stuff for standing still and contemplating what to see over the next few days. - [Chicago Tribune]

Frankie Rose spent the weekend in Chicago for the Pitchfork Music Festival. As mentioned above, she peppered her set with new songs from her forthcoming third solo album, Herein Wild, which is due out sometime this fall. Turns out after two records on Slumberland, the new one will be out on Fat Possum (home of Youth Lagoon, Wavves, Unknown Mortal Orchestra, to name three). Hopefully we'll get to hear recordings from that soon.

Right before Pitchfork, she snuck in a warm-up gig, playing an unannounced set after La Luz at Shea Stadium on 7/16. Frankie has also just announced her next hometown show, playing Bowery Ballroom on September 23. Tickets to that show go on sale Friday (7/26) at noon. No other tour dates have been announced yet.