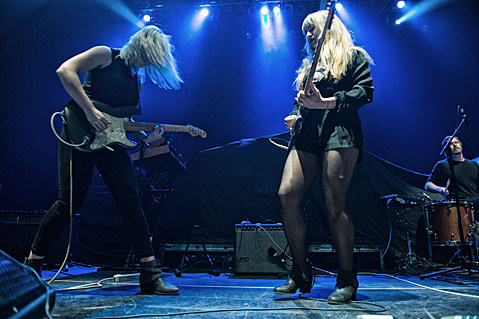 Brooklyn dream popper Frankie Rose returned this year with a new album, opening for Franz Ferdinand a couple weeks ago. In early 2014, Frankie will hit the road opening for another bigger group, White Lies, who at the very least, are similarly inspired by '80s post-punk. We already mentioned she's touring the UK with them in December, and they've since added North American dates, including one in NYC happening on February 25 at Webster Hall. Tickets for that show go on sale Saturday (11/2) at noon. All dates are listed below.

If you want to see Frankie much sooner, and at a smaller, headlining show, you can catch her on Saturday (11/2) at Brooklyn Night Bazaar, which opens in its new permanent Greenpoint location this weekend. Also on Saturday's show are Mahogany, Monogold, Heavenly Beat, and DJ DUST. Like all Brooklyn Night Bazaar shows, it's totally free.

Meanwhile, the Brooklyn Night Bazaar opens tonight (11/1) with performances from two very different Baltimorians: rapper/partier Spank Rock and noise rockers Dope Body. Like we've said before, BNB will be open every Friday and Saturday year-round. Check out the current schedule.

All Frankie Rose dates are listed, along with a video, below...