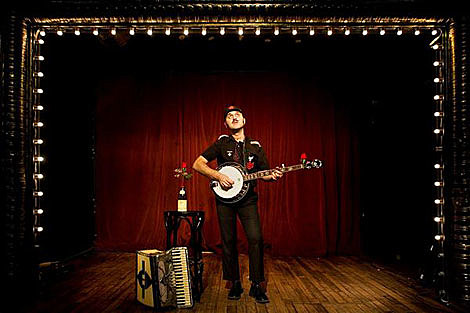 Hex Education Journal: What made you want to come out with a solo album now? Did you feel the time was just right?

Franz Nicolay: I feel the time is right to start setting the groundwork. Before joining World/Inferno I had fronted my own band, but I was having no success, nobody cared. So when I joined World/Inferno and it was a band that actually had fans I was like "thank god!" I just sort of put that part of myself aside for five or six years, but I knew it was something I was going to turn to, and one of the benefits of being in World/Inferno was that I had been that I was able to do a lot of different projects and one of the things I was missing in the intense and steady touring process was the opportunity to do different kinds of music. I was afraid of getting re-defined as a piano player in a rock band.
While I do a certain amount of songwriting in The Hold Steady Im sort of the John Paul Jones or George Harrison of the group.