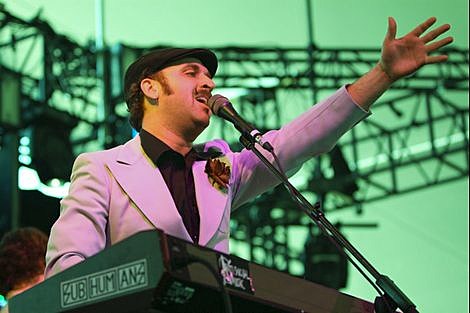 You should know: I've left The Hold Steady. I told the band I'd be leaving in early September, played my last show with them in Minneapolis around Thanksgiving, and dotted the t's and crossed the i's this week. Five years seemed like a nice round number. Thanks to everyone who was a part of the experience, especially the Unified Scene, who are nice folks. I'll see you all soon in any case. [FranzNicolay.com]

Franz goes on to list the bevy of projects that've been keeping him busy: a story collection called Complicated Gardening Techniques, a new CD with Mischief Brew & Guignol Fight Dirty, his own solo EP (a follow-up to his 2009 LP Major General), production work with The Debutante Hour, and a World/Inferno barbershop EP.

Franz has some solo shows coming up (in addition to his collaborative projects). He plays Knitting Factory on February 26th for a show with Tim Fite and Toronto band Zeus. Tickets are on sale. He'll also be touring the UK in March.

His band Guignol will be playing Freddy's Backroom on February 2nd with The Debutante Hour, Phoebe Kreutz and Otis Pike.

In 2009, he collaborated with Pearl and the Beard, putting accordion to the track above, off their album God Bless Your Weary Soul, Amanda Richardson. Pearl and the Beard have a show coming up this weekend, Saturday, January 23rd at Mercury Lounge, where they'll play with Xylos, Team Genius, Echo Station, The Static Jacks and Valerie June. Tickets are on sale. Their "Will Smith Medly" video is below, along with some Franz videos and all tour dates...

Pearl and the Beard - Will Smith Medley from Goddamn Cobras Collective on Vimeo.

Franz Nicolay "This World Is An Open Door"

Franz Nicolay of The Hold Steady - Cease-Fire WNRN in Charlottesville, VA on January 6, 2009