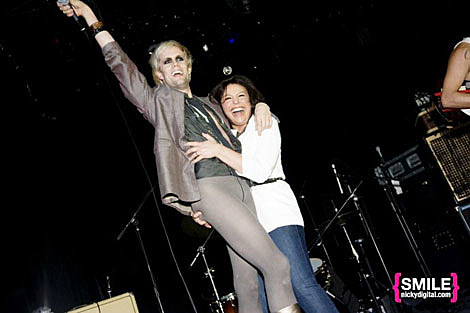 As posted earlier today, Franz Nicolay & Major General will be opening for the Pogues at Roseland Ballroom on March 13th, but that is just one of many shows the Hold Steady's moustached member has coming up. Another one is tonight, March 5th...

Franz is doing the same thing at the Delancey with a different bill on March 12th too, and he's doing a reading at Bar Matchless on March 14th. He'll have a busy few days which almost immediately then turns into a Hold Steady trip to SXSW that starts with a pitstop in Portland for a March 16th show at the Crystal Ballroom.

At SXSW, Franz is playing one solo/Major General show, and The Hold Steady are playing two. The first HS show is Friday March 20th at Mohawk. That's a public, official SXSW appearance. The second is the next day at Maggie May's for the Tom Jones-and-Semi-Precious Weapons-loving Rachael Ray. And they're not the only ones playing her party. As previously mentioned, The Airborne Toxic Event will be there, and so will New York Dolls, Ra Ra Riot and The Thermals. You can see the whole lineup and more details on the Dunkin Donuts spokesperson's website. The picture above was taken at Rachael's NYC show at Santos last week. See more like it at Nicky Digital's site.

NY Dolls also have an official SXSW show, and Sylvain Sylvain is sitting on a SXSW panel called "The Sound and the Fury". This all in addition to a new record coming out...

After working together on the New York Dolls' influential debut in 1973, the group reunited this winter with producer Todd Rundgren to record their fourth studio album, Cause I Sez So, set for a May 5 release on Atco Records.

Recorded at Utopia Sound Studio in Kauai, Hawaii, the album features 11 original compositions and a new version of "Trash," which was on their 1973 debut album. "It was amazing working with Todd again, and I think we were able to evoke the special sound of our first album and drag it by the hair into the present," says frontman Johansen.

No upcoming Dolls dates in NY, bit Ra Ra Riot are at NYU TONIGHT (3/5), The Hold Steady are at Irving Plaza on March 30th, and The Thermals are playing Bowery Ballroom twice in May.